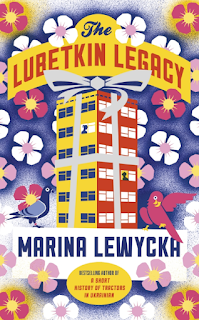 I'm grateful to the publisher for an advance e-copy of this book, via NetGalley.

Berthold Sidebottom (yes, really) is a "resting" actor in his 50s who can't help comparing himself, bitterly, with George Clooney. Berthold had a wife, a daughter, a life - but now he's lost all of them and is back living at home with his elderly mother, Lily.

Lily is a redoubtable character, an old campaigner ("don't mourn, organise!" exclaims her parrot at one point) who fought for a better world - a world exemplified by the flat she still, just about, clings onto. Part of a block built by the visionary architect Berthold Lubetkin ("nothing is too good for ordinary people") in an age of benevolent municipal socialism, the flat is now threatened by the Bedroom Tax, Right-To-Buy and various iffy deals centred on the local planning department.

But then Lily is taken off, first to hospital ("How had this sudden change come about? It had crept up on her so gradually that I had not noticed the point at which my indomitable mother had become a frail old lady") and then to that undiscovered country from whose bourn no traveller returns (Berthhold is inclined to quote Shakespeare) and her son left alone to deal with the DWP, the Housing Department, and relatives keen to snaffle the flat. He bounces between the various powers that would see him out on the street and we gradually learn more about his own circumstances (tragic wouldn't be over the top as a description of them) and his family background (descended from a line of agitators and trade unionists and from a mother who had three very different husbands).  Berthold is far from hapless, cooking up a plan to block the bureaucracy he can see coming to dispossess him, but is hampered by the complexities of Lily's love-life (was she actually married to all those husbands? Did Lubetkin really promise her the flat? And how do Berthold's ne'er-do-well half brother and crazy sisters fit into the picture?)

As if that wasn't enough, Lewycka introduces Inna, Lily's Ukrainian neighbour in hospital, who agrees  to impersonate Lily to prevent Berthold losing the flat. Via her, Berthold comes to understand about the (also tragic) history of Ukraine. But Inna has her own train of dodgy connections - and her own agenda (what's really in the Ukrainian delicacies she keeps feeding him?)

But there's more! Newly arrived in the same block is Violet, a young woman of mixed UK and Kenyan background who's just started her first job in the City, in "Wealth Preservation". She's rapidly introduced to a shady world of offshore transactions, transfer pricing fraud and corruption ("Now at the end of her first month she is wondering whether she has chosen the wrong career") which parallels the goings on at Madeley Court.

Throw in a threatened cherry orchard, an incompetent funeral director's ("Wrest 'n' Piece") and a supporting cast of diverse neighbours, and one soon begins to reel at the sheer breadth of the book. Lewycka remains in command - just - of all this material, but I could have wished for slightly less at times. I felt there was enough of a meaty plot in Berthold's difficulties without a parallel African corruption scandal and that it was a shame the Kenyan angle seemed to serve mainly to highlight corruption, which seems a slightly stereotyped view of Africa. Put another way, Violet herself is one of the best realised and most sympathetic characters in the book, (Berthold being rather self-absorbed, not to say self-pitying, though he has his reasons) walking a tightrope between her European and African heritages, tying to find where she belongs, trying to do the right thing. A story about her alone would also be quite enough for a whole book. Put together, there seems to be a little too much going on.

It is a very funny book at many points, sharply observed - here's Berthold on Violet: "I knew I must take things slowly... a lovely girl like that is always surrounded by men wanting to get her into bed. Not me. I was different. I was caring, sensitive, a big soul, a good conversationalist, a good listener, a good neighbour and friend, a good... whatever it took." The humour is, as that example shows, frequently dark, the humour of people in impossible situations simply trying to get by ("What use history... in history, everybody slightly dead"). On the other hand, at times the commentary can be rather heavy handed, rather labouring parallels between the doings of the 'oliharki' in Russia and Ukraine, the scam that Violet's boss draws her into, the Kenyan corruption and the dodgy dealing in the Town Hall.

Overall, the book is perhaps at risk in places of throwing too much material at the reader, but nevertheless it's very entertaining and certainly thought provoking.
Email ThisBlogThis!Share to TwitterShare to FacebookShare to Pinterest
Labels: 2016, Marina Lewycka, modern, NetGalley, review