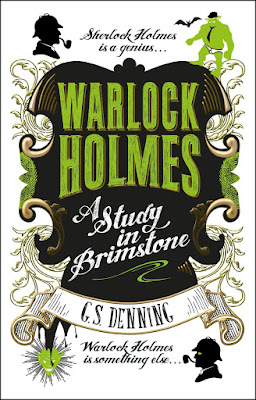 It's not that I'm on a Sherlock Holmes binge or anything but in the past few weeks I've read three books with very different takes on the Great Detective. I would like to compare and contrast them and to ask what exactly it is about Holmes that so captivates the imagination, but that's for another day, perhaps...

Warlock Holmes is in some respects the most radical reinterpretation - not only in making Holmes a warlock who holds conversations with demons but in having him very much secondary to Watson in the business of detection. Here it's the good doctor who displays feats of deduction, inferring a chain of thought from a few glances or spotting the sequence of events comprising a  crime. That actually makes a lot of sense: in the classic stories, Watson is using his medical training to do what Conan Doyle saw demonstrated as a medical student at Edinburgh. It's time Watson stepped out of the shadows, but still perhaps a bit of a shock - especially as Holmes is portrayed here as, well, a bit dim.

Of course, in this world, there's no reason for Holmes to painfully deduce what's been going on. He can just speak to the spirits and indeed this method means he's often still ahead  of everyone else (several days, on one occasion). So to make the stories interesting it's pretty much a necessity to rob Holmes of his brilliance, or none of the stories would last very long.

That may sound unpromising and I'm sure that Holmes purists will cringe, but Denning actually manages to riff off the classic stories well well - while subtly twisting everything. The cases are pretty faithful to "real" ones, not only in general structure and in the way the crimes are revealed - the anxious client appearing at 221b to explain their problem, with plenty of misdirection and the real crime only gradually emerging thanks to razor sharp deduction (here, by Watson) - but in tone, too: it's a world of hansoms, mansions set in walled gardens, wild backstories from the California goldrush or the outposts of Empire. But they are a bit... different. Familiar characters appear - Gr(o)gson and Lestrade, a strageely warped version of the Baker Street Irregulars, Colonel Sebastian Moran, Mrs Hudson, Charles Augustus Milverton - but they all play slightly warped roles in this alternate universe.

The idea works a lot better than I'd expected, producing something much fresher than those endless, exact Holmes pastiches that deliver the familiar form yet without any vital spark. You have to recalibrate to a slightly different Holmes, and to a general comic tone which as I have said may alienate some purists (but come on, purists, lighten up!) but it's well worth doing that. It's also refreshing that the cases are pretty much standalone, as in the original stories: while there is a darker threat building, Denning doesn't impose too much of an arc on the separate chapters, allowing each its own beginning, middle and end rather than making it just a building block in something else.

The tour de force is a reimagining of The Speckled Band, in many ways the Sherlock Holmes story, one which was turned into an enormously successful play during Conan Doyle's lifetime. Denning gives it new life: of course if you have read the original story you'll know who the villain is yet there are still surprises and the story really grips as an episode in itself. There are also some nice illustrations by Sean Patella-Buckley complementing the text just as in those original Strand magazine stories.

Overall, then, a nice take on a perhaps overfamiliar character and one that ended - of course - with a cliffhanger to encourage me to pick up the next volume, due out next year.