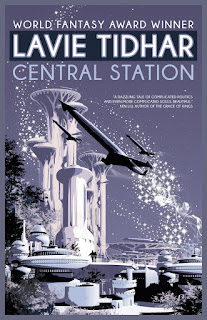 I'm grateful to the publisher for an advance copy of this book via NetGalley. I have also bought a copy, as I was lucky enough to get to a signing at Forbidden Planet in London. (I can report that Lavie is a lovely person; as well as signing, he also marked on the map in the book where his mum's house is. The cover designer, Elizabeth Story, was also there so I know that those are REAL spaceship designs!)

A worldwide diaspora has left a quarter of a million people at the foot of a space station. Cultures collide in real life and virtual reality. The city is literally a weed, its growth left unchecked. Life is cheap, and data is cheaper.

When Boris Chong returns to Tel Aviv from Mars, much has changed. Boris’s ex-lover is raising a strangely familiar child who can tap into the datastream of a mind with the touch of a finger. His cousin is infatuated with a robotnik—a damaged cyborg soldier who might as well be begging for parts. His father is terminally-ill with a multigenerational mind-plague. And a hunted data-vampire has followed Boris to where she is forbidden to return.

Rising above them is Central Station, the interplanetary hub between all things: the constantly shifting Tel Aviv; a powerful virtual arena, and the space colonies where humanity has gone to escape the ravages of poverty and war. Everything is connected by the Others, powerful alien entities who, through the Conversation—a shifting, flowing stream of consciousness—are just the beginning of irrevocable change.

The breadth of Tidhar's imagination in this book just left me gasping.

Central Station itself is a spaceport. Built in a future version of Tel Aviv, several centuries hence, it provides the gateway to the "Up and Out". Like the seaports of old, a vast and diverse hinterland supports the Station and this book tells the stories of some of those who live there.

Here you'll meet Miriam (Mama) Jones, owner of the best shebeen in Central Station, Kranki, her adopted son and Boris, once her lover, who has returned from Mars. And Achimwene, who trades in ancient yellowed paperback novels. And his friend Ibrahim, the rag and bone man.

There are also robotniks, modified humans made for fighting in forgotten wars and then cast adrift. And true robots - R. Brother Patch-it is as much a robot as Asimov's R Daneel Olivaw.

And an Oracle. And an artist who makes gods.

And a data-vampire, a Strigoi.

In his preface, Tidhar places himself in the story of Central Station, sitting in the real place where he builds his imaginary spaceport. He's writing an origin story, looking back to the start of humanity's journey to the stars: a time when the events of this book are already old.

This was in old Central Station, that vast space port which rises over the twin cityscapes of Arab Jaffa, Jewish Tel Aviv...

So the events set out here are distant, given significance by what happened after (which of course we don't know). That's a useful device for stories whose focus is very much scene setting. The real business here is establishing the reality, rather than developing a complex plot. There are wonders here. The endless virtual Conversation, which (almost) everyone taps into via their "node", an artificial organ grafted in at conception. The AI "Others", bafflingly alien intelligences created by forced evolution and which were then freed almost as apolitical act. What do they really want? Godlike children and childlike gods. It's at times a little reminiscent of M John Harrison's Viroconium, at others consciously SF Golden Age, and always imbued with a vivid sensual layer: the smell of the orange groves, the sheesha pipes, the sea foam.

Within this achingly real, evocative framework, Tidhar takes his time developing the stories of his characters. Each of them struts and frets on the stage and we learn who everyone is and what they've done. Again they're well realised and, well, real characters, from the old man who's losing control of his memories to the scared woman who didn't ask to be made a vampire and who shouldn't be here on Earth. Even when bizarre, science fictional, they're very human stories, recognizable people and situations.

There is more promise though of where these people might be going - and that tantalising preface hints at this - than actual events. So if you love worldbuilding, good characterisation and a world of possibilities, this is definitely for you. If you're impatient for action and a twisty plot it might not be.

For myself, I loved it. Whether it's Achimwene's tender (doomed?) love for Carmel, Miriam's confused feelings for Boris, Boris's concern for his father or the simple story of a child waiting for his father to return, this is an absorbing tapestry - the more so for Tidhar's slightly warped view of future religions ("the Church of Robot"), his wry turn of phrase ("the tin man's burden"), ("furniture with hostile programming"), beautiful language ("Under the eaves. Under the eaves. Where it's always dry where it's always dark, under the eaves", "Memory like a cancer growing") or a myriad other things, the book fizzes with invention and in its portrayal of future humanity, has real heart.

I hope that there will be more from this world. The book brings together separate stories, a feat that, again, echoes Golden Age SF and it does so very well, creating a wonderful text but I would simply kill for a full length novel drawing on all this background and carrying the story forward as hinted at in the Preface.

I've no doubt Tidhar could triumphantly write such a novel, I just hope he wants to and has time!

Central Station is published on 10 May.