Blog tour: The Evolution of Fear by Paul Hardisty 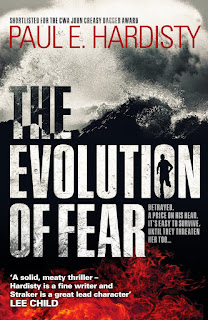 As regular readers of this blog may have gathered, I don't review a great many thrillers here, so I'm stepping a bit outside my comfort zone with this (good!) I have though found that the recent ones I've seen from Orenda have all been cracking reads, so I'll take the risk (I apologise in advance to any avid thriller readers who are be tempted to shake their heads at something below and say "duh, it's a thriller, that's supposed to happen!"

Let's begin, then, as we must, with the setup.

It's 1994. Claymore Straker (Clay to his friends -if he has any left alive) is hiding out in a cottage in Cornwall. He's hiding from the CIA. He's hiding from a Russian crime boss he's annoyed by killing her brother. He's hiding from his lover. Possibly he's hiding from himself. All this is a consequence of what happened in Hardisty's previous book, The Abrupt Physics of Dying and while this book can certainly be read on its own, I think that you ought really to read them in order.

So. Clay is hiding.

Then some men with guns appear looking for him.

And people start to die.

This moment in the book is a declaration of war. Through the rest of the story Clay is basically a soldier. The conveniences and features of modern life - airports, streets, hotels - are just the territory on which he fights his battles, and the structures of the state - police, borders, passport control - all recede into a kind of fog that he slips past almost without effort. It takes credible, forceful writing to make this work and Hardisty barely lets up for a passage or a page.

While Clay may be at war, it's far from clear at first exactly who with or why. It's not as simple as "some guys are hunting him, he turns on them". There are betrayals, factions, conflicting interests which don't become clear till the end (perhaps not completely even then). At the centre though is his (ex?) girlfriend Rania. She's apparently in danger, but this isn't a simplistic damsel-in-distress scenario: Clay also has a price on his head, he has things to atone for, he has losses to avenge.

And as the story scorches through Spain, Switzerland, Turkey and Cyprus, other angles emerge - greed, theft, political chicanery and even the threat of renewed war on that divided island. (I don't think the book will do a great deal for the Cypriot tourist industry! It makes the place out to be little more then a playground for Russian oligarchs, whose gangs of thugs seem free to fight pitched battles against their master's or mistress's enemies.)

It's all done with great verve, and Clay is a complex and difficult central character. I won't say I actually liked him that much: apart from the way he notices any attractive woman in his vicinity, he's a former soldier for the apartheid era South African army. But - he has definite qualities.  He's determined, loyal - often to his own detriment - and he's wrestling with some pretty dark history. And while he kills in this book so many times that I lost count, he's not proud of that, or of his past. One of the things I did like about him from the start is that he competent - whether sailing a boat across the Bay of Biscay in a hurricane, disposing of inconvenient corpses in a hotel or finding the best way to evade a tail in the backstreets of Istanbul. (Me, I wouldn't have got past page 2 before ending up dead in a hedge). In short, Clay is the sort you definitely want on your side in a tight corner.

Overall, then, a rollercoaster of a thriller that will keep you reading, with some real surprises at the end. And the end doesn't tie everything up neatly: I sense more trouble ahead for Clay.

This review is part of the Evolution of Fear blogtour. You can see other participating blogs in the poster below - try some of them for different perspectives and insights on the book! 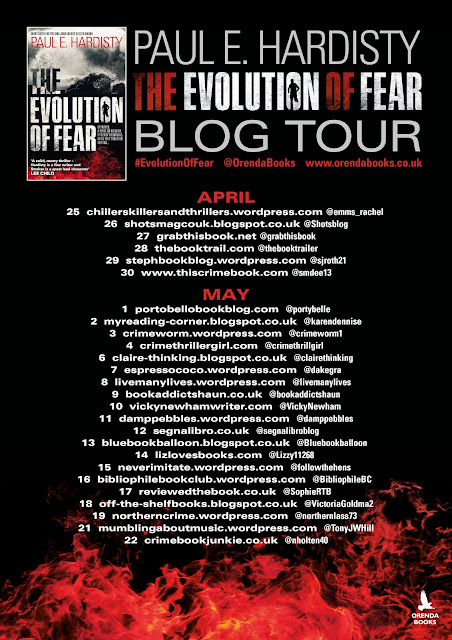