Review: Every Heart a Doorway 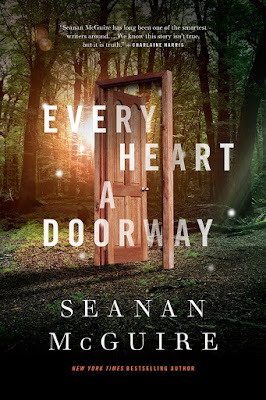 This a brilliant book which I enjoyed immensely (as well as being very moved by it, both saddened and uplifted).

It is also I think the weirdest book I've read in a long time. (Which is great. Weird is good: long live the Weird!)

But - and I often find this with books I really loved - it's hard to know where to start in writing the review.

The plot is easy to summarise. Eleanor West runs a boarding school for survivors, children (mostly women and girls) who've come back after straying into other worlds - many of them Wonderlands of various types, some more... gothic. On return, of course, nobody will believe them and each pines for the life she enjoyed in a place attuned precisely to here.

Eleanor picks up the pieces.

To this school comes Nancy, lately returned from service to the Lord of the Dead. As if it wasn't already hard enough having parent who think she's off her head and having to fit in with girls who (mostly) seemed to have visited sparkly rainbow fantasy worlds, nasty things begin to happen after her arrival...

Yes, this book has plot, it has super plot. But the story isn't really about the plot. The heart of this book is very much the characters McGuire sketches and this is where I fear I won't be able to do justice to the book. It's a short book, but she makes each believable, rounded and - in their own way - both tragic and hopeful. There's Jack and Jill, the two girls who visited the achingly bleak Moors, inhabited by vampires and mad scientists. There's Kade, one of the few boys, who everyone used to think was a girl. he was exiled from his adopted world because that broke a rule: the others may hope to return, he never can. Sumi became accustomed in her world to high Nonsense and is really having trouble fitting in. Loriel found a home in a world of spiders.

It gradually becomes clear that all of these young people are traumatised, scarred by exile from places where they felt uniquely at home - many of them refer to their other worlds as "home" and most have been rejected pretty much by their families. Indeed, I think that they may have been alienated from their families before the strayed through those doorways to find refuge in a different place.

That is a pretty obvious metaphorical point here about people who are exploring their own identity, trying to find a life, a world, that suits them and cutting ties with family and home. It's emphasised by the presence of those who are different in other ways - the minority here who have a gothic outlook, longing for sweet darkness, stillness and quiet, those whose gender identity makes them different, those who are, simply, odd - and spelling it out perhaps makes it seem laboured. But in the book it's not. McGuire has whatever the writers' equivalent of green fingers is (inky hands?), displaying a sure touch with her characters and she makes this extended metaphor come alive, celebrating the glory of difference at the same time as she evokes the pain of knowing there is somewhere you fit in but not being able to get there.

While I don't think the idea of an "aftermath" for adults who experienced other worlds as children is a a new one - I'd point to Joe Hill's NOS4R2 or Alan Garner's Boneland as other examples and I'm sure there are more - Every Heart a Doorway is distinct in focussing on the phenomenon as though it applied to multiple young people, so enabling interaction between them, exploring the group dynamics of the situation, as it were. And it does so very well, touching on some fascinating issues (isn't it a bit, well, creepy for a teenager to want to go and serve as a living statue in the Halls of the Dead? Is she actually capable of making that choice? What would you be prepared to do to get back to that other place? How will you live if, like most of us, you know you can never reach it?)

I've rambled on enough. Read this. It will introduce you to some terrific characters and take you to very dark places. Parts are almost tear jerkingly sad. But, as I said above, it is also uplifting. Above all it is a real experience of a read. Strongly recommended.