The Malice by Peter Newman 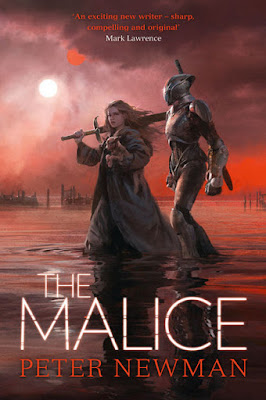 Full disclosure: I bought my copy at the launch (see picture below) where I met both Peter and his wife Emma, who are both wonderful, hard working, delightful people. So this review has a firm pro Newmans bias and I won't pretend otherwise.

That out of the way, what do you get from The Malice?

This is a sequel to The Vagrant, which was published last year. In that book, a long feared plague of demons had burst from the Breach.

Long feared - but over the centuries, the readiness of the Empire of the Winged Eye to face them had rusted, so that when the infernal threat crystallised, the response was half hearted, and the demons won. The Empire withdrew to lick its wounds, while humanity suffered under a demon taint that warped things in grotesque ways.


So far, perhaps, so epic fantasy. What was really different, though, was what Newman then did with the setup. Of course, we need a Hero and a Sword and we got them. But the Sword was sulky and the Hero (the Vagrant) was without speech. (My daughter can't talk either: she could be a Hero!)

Also, the Vagrant was accompanied by a baby. So the battles and escapes were complicated by childcare. And to provide milk for the baby, the Vagrant he procured a goat - who was as much a character as any of the others. These four crossed the tainted wilderness, looking for safety, which they found with the remnant of the Empire. But it was a shifty, equivocal sort of safety and the Empire itself scarcely inspired confidence.

So it's not a surprise that, twelve years later, it is still losing ground. The Seven didn't see the return of the Sword (the Malice, as the demons call it) as a sign to ride forth in conquest: can it be that having already lost one of their number they're actually a little bit... scared?

So begins The Malice. The baby of the previous book has grown up and is the (rather awesome) hero of this one, the young woman Vesper. The goat has grown old (but still packs a vicious kick) and given birth to many, many kids, one of whom shoulders his way into this narrative. (It's in the genes).

The sword is stirring, yet its master, the Vagrant, hides the fact. He doesn't want any more adventures. He wants to keep his daughter safe. The Winged Eye sends for him and the sword - they are willing that it fight their battles for them - but it is Vesper who answers, of course. This begins another grim journey by an innocent abroad across the tainted wasteland towards great peril.

Interspersed, we are given some background, explaining how the demon threat arose and how the Empire of the Winged Eye was founded to oppose it. From the beginning, it was established upon slaughter and treachery: from the beginning, flaws (rigidities, a lack of empathy, a certain arrogance) were built in that we see bearing dubious fruit a millennium later. One of the great jolts this book gives is the realisation that, perhaps, good and evil are not so distinct here as everyone thinks. This is masked by the language of supernatural evil used of the invading horde - "demon", "taint" and "infernal" - and they are certainly a grim brood. Yet as Vesper crosses their domain it becomes clear that humans can live alongside demons, despite the fury of the Sword (which wants to scorch the taint away wherever it finds it: tricky when Vesper has found herself tainted allies). The demons don't all want to fight - the sinister First always offers bargains and others want Vesper's support against the Yearning, the latest wave of invasion coming form the Breach.

In short, the world may more complicated than the Sword, the Seven and the Winged Eye in general believe. So Vesper comes to believe, and accordingly she employs compromise, trickery and guile as much as, or more than, the burning magic of the Sword. Though she is prepared to use that where necessary - and compromise, trickery and guile have their own cost, sometimes paid by loyal supporters.

At the heart of the book is the relationship between Vesper and the soldier Duet, a woman formed as one of a pair and sworn to defend Vesper to the end. The two travel to meet the Yearning, with the younger, less experienced woman forced to depend on Duet's survival skills and fighting instinct. It's an uneasy relationship at times - from Duet's point of view Vesper should get with the programme, draw that bloody sword and begin scorching away demonic taint. (And eat the wretched goat before it lands them in trouble). Duet has all the focus - and obsession - of a fanatic, showcasing both the strengths and weaknesses of the Winged Eye: its dedication and devotion always apt to cross over into rigidity and fanaticism.

Newman introduces or reintroduces a wealth of gripping characters: not only the demons (the Man Shape, the Backward Child, Gutterface, the First) but also the hard pressed humans and tainted beings of New Horizon (Tough Call, the Usurperkin Max and Maxi, Doctor Grains..) who are trying to build free lived amidst the ruins. Neither the purity of the Winged Eye nor the "corruption' and slavedriving of the demons, make a comfortable life for those at the bottom, but it seems as though neither can, in the end, defeat the other. What is to be done?

Maybe Vesper has another way. Maybe. But while she's heard the stories, from her Uncle Harm, of her father's previous journey, she seems desperately naive and inexperienced to be straying among demons, mutants and warped humans. Duet wants her to be ruthless, but it's far from clear whether she will, in the end, be able to do what it takes to destroy the Breach and free humanity from the demons.

It's an enjoyable, and enjoyably different, book that is written with the same fizz and sly humour as the previous one. More political, less of a chase perhaps than The Vagrant, there are many loose ends left to unravel in the situation that Vesper leaves behind as she crosses the continent.  I assume and hope there will be a further book where some chickens (or perhaps goats) come home to roost, exploring those ambiguities further.