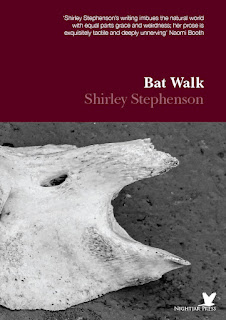 Bat Walk
Shirley Stephenson
Nightjar Press, November 2021
Available as: PB, 20pp
Source: Annual subscription
ISBN: 9781907341588
Bat Walk is the story of a woman and her boyfriend who are taking part in just that - a nature walk, held once a year in a remote Northern country, which is an opportunity to observe bats. The story, told in the second person present and therefore subject to a distancing effect, describes events leading up to the trip and then what happens on the night of the walk itself.

The narrator is preoccupied by her father's illness and her attempts to check up on him back at home and in hospital. Her concerns about being out of phone coverage and unable, when she does get through, to get any update, add a sense of tension and an air of being out of contact. She's already suffering bad dreams and these, combined with a suspicion that not all is well with the boyfriend, set us up for things to go wrong at any moment.

It's clear that the narrator is far from 100% onboard with the bat project, and really seems to have little in common with her boyfriend, but that fact seems to shrink in importance as the bat walk itself morphs into something folk-horror adjacent at the end of the story. Just what is going on? Stephenson refuses to make it clear, rather leaving things on a delicious note of uncertainty. 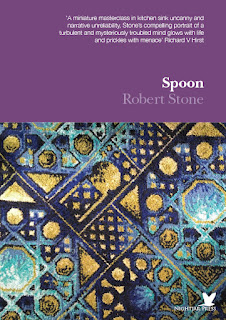 Spoon
Robert Stone
Nightjar Press, December 2021
Available as: PB, 16pp
Source: Annual subscription
ISBN: 9781907341656
Oh there are so many dangling mysteries in Spoon. Where shall I begin?

The story is told by an unnamed narrator who shares his mother's home. He has recently returned with only a small bag of possessions. He has no job. Perhaps he ought to find one. Has he been abroad? In prison? Travelling? We don't know, though there is a sense of some significant past event, something to be regretted.

Rather than explaining this, the narrator spends a lot of time telling us about his observations of animal life in the house and garden: welcome - bees, spiders - and unwelcome - rats, which he attempts to eradicate. (The squeamish may not care for this part.) It's almost as though the close observation of the other creatures that share the space is an effort to avoid something - or, just possibly, the opposite, a way of conveying some truth without being able to state it plainly.

In a few pages, the story covers lots of ground, beginning by evoking the normality of family life, with shrewd nods to the ways things work over time, the tray of tea things that stays in its place for decades, the items nobody ever thinks to replace, the sense of familiarity with all the little noises of the house (water pipes, floorboards). Then is begins to inject notes of doubt. Those noises are so familiar that variations immediately stand out: scurrying in the attic or a poorly functioning boiler provoke dis-ease. The familiar may still be, or point to, the weird.

All this, blended together, gradually loosens the reader's sense of what is real, what is being dreamed and what might simply be an untrue, so there's a sense the story may go anywhere... as indeed it does.

A deeply unsettling, yet fascinating story. 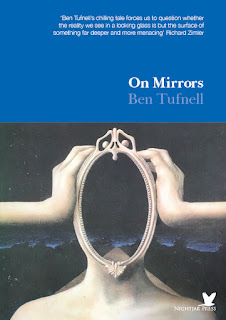 On Mirrors
Ben Tufnell
Nightjar Press, November 2021
Available as: PB, 14pp
Source: Annual subscription
ISBN: 9781907341601
Like many of us, I've spent most of the past two years working from home over a screen and become more familiar than I'd like with my own face. I've noticed the weirdness that results when a different screen options shows both mirror image and camera view at the same time - are those faces behaving themselves?

Tufnell's eerie little story explores this disquiet, though he stays away from modern tech (I think the story is set pre Internet, with the analogue camera still in everyday use) and the weirdness induced by a mirror - which allows for a fine description of the time-worn, spotted artefact and also an investigation of its history and origins.

Tension builds as this history unfolds and as the true nature of the narrator's situation becomes clear. Eventually he takes drastic action to resolve things, but - in a twist of cosmic horror - I suspected that what he did "won't hold up the weather". 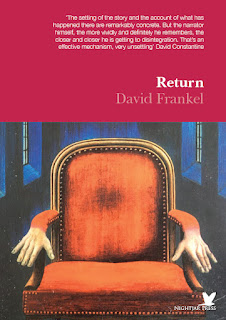 Return
David Frankel
Nightjar Press, November 2021
Available as: PB, 13pp
Source: Annual subscription
ISBN: 9781907341595
A young man (impliedly, though it is never confirmed) returns to his home after an absence. He hasn't sent a message ahead, so nobody is expecting him, and he just walks into the house. Where is everybody? The absence of his family grows from being a bit odd, to strange, to the defining feature of the books. And there are strangenesses besides.
Frankel's story packs into a few pages an entire account of what went wrong and presumably what led to the narrator's absence. It's done layer by layer, with the reader's level of concern rising steadily until it consumes one's understanding of the story and suddenly shows everything in a very different light. The unease bleeds over from a curiosity about what happened then, to a doubt about what is happening in the now of the story, a concern over how what we see can coexist with what we seem to being shown - and about what will happen next.
The realisation of how this is going to play out comes suddenly,  with various explains, from the supernatural to the religious to the psychological still available - the choice between them perhaps for the reader.
This is edge-of-your-seat, tense stuff, transporting the reader to an unfamiliar and very uneasy place.