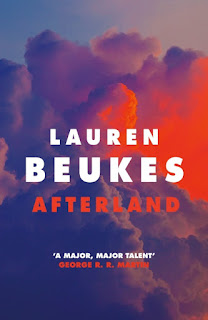 I'm grateful to the publisher for an advance e-copy of Afterland via NetGalley.

It's been too long since Lauren Beukes had a new book out so I was really looking forward to reading Afterland - and it didn't disappoint.

What I hadn't realised was how much the experience of reading which would be influenced by the covid-19 pandemic.

Kudos to Beukes though for making this point in the before and for nailing so much else from the panic buying ('A notice at the cash register with a sad-face emoji reads, "Sorry! Hand sanitiser sold out!"') to imagining a disease with an impact that isn't only immediate - her fictional virus is flu-like and doesn't cause mass deaths - but which has longer term, devastating effects. In this case they're worse than the "long covid" we're beginning to hear about, rather the 'Human Culgoa Virus' has a nasty payload of aggressive, untreatable prostate cancer which means that within a few years, the male population has been practically wiped out with only a few men and boys left.

Miles is one such boy, and this story is about how he, his mother Cole, and his Aunt Billie fare in a desperate, hand-to-mouth road trip across the US, seeking safety from the Government, from gangsters, terrorists and religious extremists. Stranded in the US by the onset of the HCV wave, all Cole wants to do is to get her boy home to South Africa. But healthy males - males who've survived infection - are a sought after commodity and both of them are soon taken into custody, allegedly for Miles's protection, apparently for research. No contact with lawyers is allowed and Cole is threatened with prosecution for allegedly trying to 'traffic' her own son out of the country. But they're kept in comfort, at least while others starve amidst the economic wreckage caused by the virus.

The story follows Miles (sometimes Mila, once he and his mum take flight), Cole, and Billie through their journey, with excursions into the past and - in Cole's case - interruptions, in her head, from her dead husband, Devon. It's dominated by two relationships - those between Billie and Cole, and between Miles and Cole.

Cole is haunted by guilt. Guilt that, improbably, her son survived while so many others didn't. Guilt about Billie, who was hurt in the escape and who she fears may be dead. Billie seems to be driven by fear and resentment. Beukes shows us correspondingly different - often amusingly different - views of Cole's and Billie's past as the two women recall their childhood in South Africa. It's a vivid depiction, showing how the events of the novel are driven by that shared and disputed history, and in particular how Cole's judgement and even her basic present-ness in her own life are sapped by that paralysing, haunting guilt. She and Miles can ill-afford that: they are on the run, hunted, with few resources and no friends.

Cole and Miles are depicted in just as much complexity. Yes, at one level they are mother and son (sometimes, daughter) coping with the loss of Devon to HCV and the hostile environment into which they've fallen.  At another, Miles is on the cusp of adolescence and just as that comes, he's forced to disguise himself, to deny who he is, to wrestle not only with childhood monsters - the figure of Cancer Fingers who he imagines hiding under the bed - but with adult fear and guilt: he carefully doesn't ask about Billie, for example, even as he blames himself at first for the trouble his mother's in (she's only doing it to protect him) then swings to blaming her for upsetting his own plans ('She ruins everything. Everything.') This relationship is under pressure and the fault line runs through that traditional area, what Mum thinks is best for their kid and what said kid comes to want. Again, impressive to see such a basic, human reality maintained alongside the grand chaos and dislocation caused by the virus.

Starting, as this book does, very much in the middle of events, it took me a little while to understand the magnitude of the danger Miles is in, entwined as that is with the consequences of the pandemic. A live male is both a target - there are terrorists who want to finish 'what God started' - and a tempting asset, to be seized and literally, as Billie puts it, 'milked' (in the aftermath of HCV, worldwide 'reprohibition' bars any and all reproduction, not only to prevent the birth of males who will die a horrible death but from a fear that it may somehow permit an even worse mutation of the virus, one that will destroy humanity completely). That understanding came as Beukes gradually unpacked the wider context of what was going on post-HCV, especially through a group of wandering nuns preaching repentance by women. Only sufficient repentance, contrition and abasement by woman (who, they believe, are to blame for the catastrophe) will move God to put things right.

It's a rather brilliant and telling point that even in the almost total absence of men, this near-future, post-apocalyptic society still manages to centre them, with the surviving women apparently subordinate. This despite the fact that civilisation carries on, all the work is being done, society functioning perfectly well even if the long-term prospects might be limited. I do, sadly, find it convincing that this would the case.

It's all vividly, convincingly shown. The writing is sharp ('Aluta continua. But they're not going to be able to continua much longer without cash money...', 'the stars are so cold and bright like God's LEDs') and at the centre, as I have said, are those relationships, especially between mother and son. Despite the desperate situation they're in, growing-up doesn't stop, mourning a father you've seen die in agony doesn't stop, biology doesn't stop, and that relationship is active, developing, going all sorts of ways with secrets being kept, at times dangerous secrets and decisions taken, at times the wrong decisions. There will be moments when you read this book and want to scream and somebody "No! Don't do that!"

There will be other times when you smile at the interaction between Cole and Miles, especially when they go into a kind of geeky shorthand, experiencing the world through films, comics and genre references ('She's so unprepared for all this. Miles needs a Ripley, a Furiosa, Linda Hamilton in Terminator 2...', 'The kanji attack, and we have to work together to pilot the robot mechanics suits to defeat them?') It's a powerfully drawn, true relationship, a living relationship, often on the brink of going wrong and Beukes gives it pitch-perfectly. In the end I felt that the apocalyptic setting and the dreadful things we see and hear about were, properly, just background to this important story. Which of course only makes the stakes higher when things begin to go wrong.

Basically, I loved this book, and I think you will, too.