Review - A Song for the Dark Times by Ian Rankin 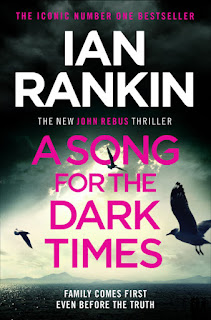 I'm SO grateful to the publisher for an advance e-copy of A Song for the Dark Times via NetGalley.

And Rebus goes on. I had a little trouble finding which number in the series is - I think it's 23, but actually, does it matter? I'm just glad to have another chance to meet the awkward, driven, intractable old sod. (Readers though may like me be alarmed at what's going on in the first few pages of the book...)

In recent Rebus books, accepting that he's no longer on the Force, Rankin has at times had to stretch things a bit to give John an in to the investigation. In A Song for the Dark Times this is finessed very nicely: Keith, partner to Rebus's daughter Samantha, has gone missing to of course it's into the clapped out old Saab and off up the A9 to try and find him. That mystery, and the worse one that emerges as Rebus begins to poke around, gives him a perfect excuse to get involved because he's family.

Which is not to say that the local police welcome or even accept him getting involved in their enquiry (and nor does Sammy, as things spiral out of control). But he's clearly in the right place and doing the right thing.

Back in Edinburgh, Siobhan Clarke and Malcolm Fox are working on a more conventional enquiry - a wealthy Saudi student, whose father is in disfavour back at home, has been found dead in a bad part of town. There are all kinds of sensitivities, and Cafferty seems to be taking an interest. So lots to  chew on there and we get to see something I've long been hoping for, a story with Clarke as its focus, out of Rebus's shadow (and taint). Fox may have got the fancy promotion rather than her, but she's, always, clearly the more capable of the two, albeit they work together well (including on looking after Rebus's long-suffering dog, Brillo).

The result is, effectively, a pair of parallel stories showcasing Rebus at his most driven and implacable (his little girl is at risk!) and Clarke being generally on top of things. Brilliant to read, and also allowing Rankin to divert off to the history of the local camp (variously used for internments, POWs and refugees) that Keith is interested in and to the precarious state of Cafferty's crime empire. The latter looks as though it's sowing the seeds for future storylines in a series that continues to satisfy.

Amongst all this, Rankin has his sights set on dodgy land deals, on the scapegoating of foreigners (both in the 1940s, with internments in the camps, and now, with assaults following Brexit) and perhaps on rich, entitled students ('no visible bookcases'). But these are more background themes than foreground concerns with the story dominated by Rebus's family concerns, especially a sense of regret that he wasn't a better  husband and father and by the axis between Fox and Clarke (there seems more of a spark between them than there is between her and Sutherland, notionally her lover).

For more information about the book, see the Orion website here.