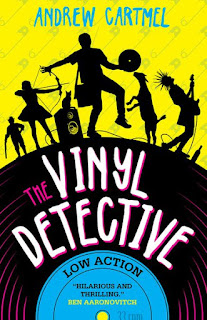 The band is back together again...

I'm a fan of Cartmel's Vinyl Detective series, so am pleased to report that this latest instalment is fully up to standard. The eponymous hero - we never learn his name - his girlfriend Nevada, embarrassing friend Tinkler, not to forget Agatha "Clean Head", are back and will potter round London and environs searching for rare records and solving crime in the process.

This time though, the crime comes upfront rather than as an adjunct to a record hunt - someone's trying to murder Helene "Howlin’ Hellbitch" Hilditch, guitarist from 80s all-female punk band The Blue Tits. The Vinyl Detective isn't too keen to get involved with murder again, but he's tempted by a side quest to find a copy of the Tits' rarer than rare debut album for a very generous fee - Eric Make Cloud is backing Helene - and off we go.

The search for murderer and record involves locating the surviving members of the group, their friends, and ex-colleagues (together with the band's roadie and Fanzine Frank, who's made a life's work of collecting everything to do with them). There's even an intriguing brush with a character I recognised from another series of books entirely. They're hoping to find who might have a reason to murder Helene - but it turns out easier to find someone who doesn't. In pursuit of the would-be killer, there's much rummaging in charity ships for records (the Detective) and once-cherished designer clothes (Nevada), eating out in pubs and tearooms, and exploring of the more interesting London suburbs.

...and close brushes with death. Because someone really, really wants a kill...

Compared to some of the previous books in the series, there's perhaps less emphasis on investigating and redressing a historical injustice - the mystery here is very much in the present - and it's clear that in focussing on the punk era,  the detective is well away from his favoured period and genre, but still, the task of tracing a disc - running down ex TV hosts, recording studio managers, and whoever else may have a whiff of the desired vinyl - is much the same. Cartmel has a gift for bringing you into his characters' world and making you want to stay there which simply makes this a joy to read. And we find out a bit more about Nevada's life and career.

It isn't gritty realism, by any means, but it's an assured, highly readable and fun story that builds on Cartmel's well-realised characters (even giving a positive, albeit small, role to Stinky Stanmer). These books paint a London you suspect isn't really there but you really, really wish was.

I hope this series will run and run.