Review - The Quickening by Rhiannon Ward 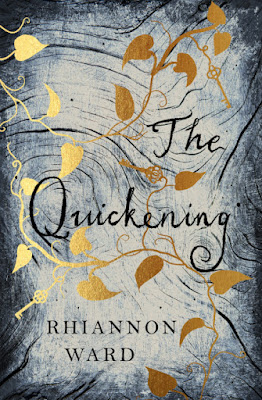 I'm grateful to the publisher for an advance e-copy of The Quickening via NetGalley.

The Quickening is a masterful Gothic novel that has it all - a woman arriving at a remote, decrepit, spooky old house; a family with Secrets; hints of the supernatural; surly servants who resent outsiders and mysteries galore.

The woman in question is Louisa Drew. In is 1925. Close to the birth of her third child, she's summoned from her somewhat chilly and, as becomes apparent, loveless Kentish Town, London home to carry out a commission - photographing the contents of a remote and decrepit country house, Clewer Hall, on the South Coast.

From the outset I admired Louisa's spirit and determination. She has no false modesty, she says at one point 'I come form a long line of capable women'. She is in her second marriage and it's obviously far from ideal. There are hints of her having lived a much more glamorous life in her days as a magazine photographer ('Aleister Crowley had told me about the tarot') She's also curiously alone in the world - having lost mother, uncle and husband, and more, as we gradually learn, Ward revealing it all bit by bit in dialogue with the story of loss and grief that Louisa uncovers at Clewer Hall. But despite her circumstances, she's tried to be a supportive wife to Edwin who frankly sounds like a bit of a creep ('Edwin was moving around downstairs, preparing his tea. If he was in a good mood, which was rare, he'd bring me up a cup... otherwise, he'd leave without saying goodbye...', 'Words froze in my throat when I received one of his withering glances.') Yes, Edwin suffered in the Great War, but one does get the feeling he's rather hiding behind that. Now, though, money is needed for the coming baby, and Louisa's prepared to do what she needs to to get it. So she's off on the train to Brighton, despite Edwin's mother's thin-lipped disapproval.

Arrived at Clewer Hall, a place much diminished and under-staffed, Louisa equally stands up for herself against the frankly weird Clewer family and the chilly house, which itself seems hostile. the Clewer don't care, they're off to India, presumably to live cheaply, and all they want till they go is to keep up the facade, forgetting whatever it was they all seem to fret over.

Apart from one thing.

The Hall is notorious for a séance held thirty years before and for reasons never clearly explained, it's to be repeated. Sir Arthur Conan Doyle himself was present on that occasion and has returned as have the other surviving participants. Who, we are led to wonder, wishes to hear the voices of the dead?

The answer, of course, in the 20s (those 20s) is, many, many people. After the loss and grief of the Great War there was a boom in Spiritualism, much of it possibly meeting a need for reassurance and comfort in a more strait-laced age. Louisa herself has, as I have said, suffered losses. Her interaction with the Hall and the Clewers - family and servants - rapidly becomes a cats cradle, a maze of sadnesses and absences, illustrated by the spooky Victorian marble children's limbs kept in a display case. Together with glimpses into the past - the time around that earlier seance - we are given tantalising hints of the full story, a mystery worthy of Mr Holmes himself which Louisa sets herself to solve despite the apparent increasing dangers to her and her baby and the growing hostility of the family.

Altogether this is an absorbing mystery story with a lot of heart. The central mystery eventually resolves to something deeply, deeply sad and provoking justifiable anger at the cruelties of the Edwardian class system and the stiff-necked Imperial Britishness of the Clewer family. It's a pattern that Louisa has, one feels, recognised in her own relationship and would do well to escape from - but what options does she have?

Ward writes arresting, vivid prose ('The space had the stillness of catastrophe delayed', 'The garden, in its icy frostiness, was a riot of red berries and yew leaves') and has a sharp eye for character and behaviour - the distance between Louisa and medium Ada and the 'gentry', the way 'we pregnant women lose ownership of our bodies the minute we begin to show', the Clearers being 'the epitome of the upper classes who I would never understand'. In a country poised ahead of the labour turmoil of the General Strike and with the Depression round the corner, The Quickening seems to look back at a time when, despite the disaster of the Great War, the dilettantism of the upper classes can still be indulged, and forward to a less innocent time.

I'd strongly recommend The Quickening, and if you're looking ahead to the end of the year I might suggest it as a perfect Christmas read so if you're searching for a present for the Gothic minded bibliophile in your life, here it is...

For more information about The Quickening see the publisher's website here.