#Blogtour #Review - The Trials of Koli by MR Carey 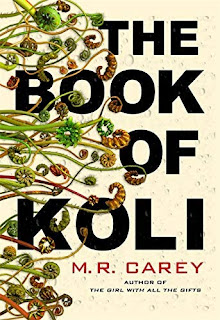 I'm grateful to Orbit and to Tracy Fenton of Compulsive Readers for a free advance copy of The Trials of Koli to consider for review and for inviting me to take part in the tour.

This is the second part of The Rampart Trilogy and in discussing it below I'm going to include some spoilers for the first book, The Book of Koli. I make no excuses for that! The stories are tightly wound, with Book 2 a direct continuation of Book 1 and I think knowledge of the earlier instalment is necessary to get the most from this one. It doesn't work as a standalone.

IF YOU HAVEN'T READ THE BOOK OF KOLI, DO THAT NOW, RIGHT?

OK. With that out of the way, where are we at the start of The Trials of Koli? Well, Koli, Ursula-From-Elsewhere, the young woman Cup and Ursula's faithful walking drone, the Drudge, are on their way to London. This future, 150-200 years hence, is a world where 'Everything that lives hates us' (see, it can get worse than 2020!) Bio-engineered plants and animals, adapted to cope with climate change and environmental degradation, have turned on their makers (...unless they were deliberately weaponised...) Combined with dimly remembered wars and the rumours of wars, this has reduced humanity to a scatter of isolated communities hanging onto remnants of ill-understood 'tech' from the Old Times. In Koli's home village, Mythen Rood, operation of the tech has been captured by a single family, the Vannastins. Koli erred and strayed when he discovered this fraud and was then cast out, precipitating various changes and disasters in the village.

This story, as I had expected, follows Koli and his friends on their way to London. I was glad to see, though, that it also picked up events in Mythen Rood - hopefully meaning we'll see more there in the final part. Spinner, the young woman Koli was sweet on but who preferred a young Vannastin boy, features prominently as the family, and the village, try to cope with the aftermath of Koli's departure and with new threats from outside. The Vannastin monopoly on tech and the superstitious rigidity that maintains it are about to make it hard for the village to address the danger it is in. Will they be able to adapt?

Meanwhile Koli encounters new dangers and temptations, passing through a ruined Birmingham and eventually reaching a London very different from what we'd expect. The little group he's travelling in has not gelled: Koli is dealing not only with people brought up like him (such as Cup) but with Ursula, whose knowledge of the world and of tech is on a wholly different level, and of course with Monono, the AI which has bootstrapped itself (herself?) from his Sony music player. Monono has deep knowledge of the world and hinted-at abilities to influence it but she and Ursala are deeply at odds. Cup is also hostile, still attached to the death cult of Senlas. The dynamics are complicated, the  band always on the edge of falling apart.

I really enjoyed the divided focus between Koli and Spinner.  Spinner is a resourceful and cool-headed woman - in many respects, quicker and with greater insight than Koli - and it's rather fun seeing her go to work understanding and (in the best sense) manipulating the society she lives in, both for self-preservation and to try and improve things: whereas Koli in the first book was (and still is, to a degree) a dreamier person who rather tends to collide with the world, a step behind rather than half a step ahead. In fact I think I actually enjoyed this book slightly more than The Book of Koli (a high bar!) for that reason. It's a mark, I'd say, of how vivid and real Carey makes his characters that confronted with a similar situation they respond so differently but in both cases the responses feel absolutely true.

In some ways Koli is perhaps the least effective of his  group at dealing with the challenges they face. But that gives some distance and perspective, allowing him, to act as narrator and make judgements about what the others are up to. Cup is gradually thawing, understanding that she's no longer beholden to Senlas and coming to terms with the reality of being what Koli's society calls 'crossed' and what we would refer to as trans. Monono, we know from The Book of Koli, wishes to be free from the hardware that encases her. Ursula has her fears about that and her hopes for the future. Lots of sub-currents here, even aside from the gradual hints about what happened to "our" world. As Spinner asks, 'What were they like, our mothers' mothers and our fathers' fathers? Who did they hate so much tp spend the fruits of their learning and the cunning of their hands on engines of such terrible  cruelty? Was it their own selves?'

We don't learn what they were like - although we can guess: like us! - but we do learn some of their identities, these soldiers of the 'Unfinished War',  in what is actually a surprisingly moving moment, when a piece of neglected and abandoned tech speaks, reading out the names of 'these four, recorded KIA, [who] were my crew for four years'. They are ordinary names, Vincent Corke, Maria Ugonwe, Stephen Egerton, Elaine Sandberg. 'I carry Elaine in non-volatile storage. Vincent and Maria and Stephen are lost, except to my remembering. As long as I remember anything, I will remember them'.

The book doesn't though, in the main, look back but forward. Koli and Spinner are living in their now, with many challenges from nature, other humans and from their mothers' mothers and their fathers' fathers, such as the poisonous silver that falls with rain or snow or the rogue drones which can strike out of a clear sky. In their different ways they face those challenges with courage, imagination and hope. I look forward to reading the final part of the trilogy, to seeing what hope they can find for the future of their - our - world.

In short: this is an epic read, a glorious and involving story that you should certainly read.

You can buy The Trials of Koli from your local bookshop, or online from Hive Books, Blackwell's, Foyles, WH Smith, Waterstones or Amazon.

For more stops on the tour see the poster below: there have already been some great reviews, more are to come! And for more information about the book, see the publisher's website here. 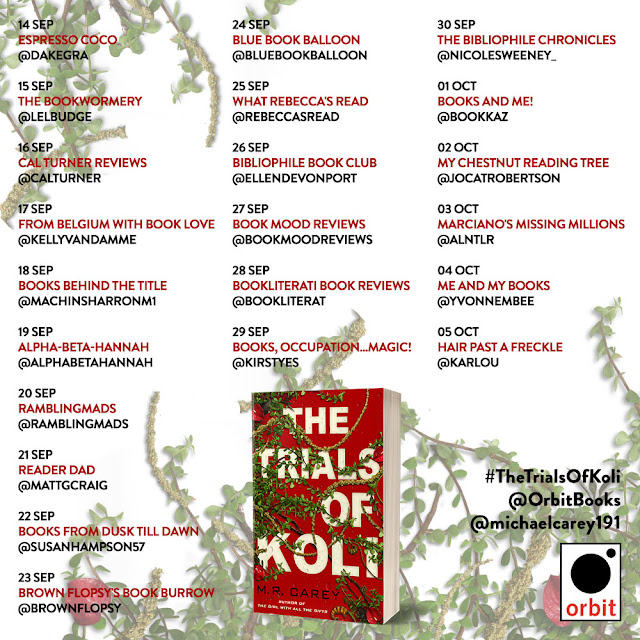