#Blogtour #Giveaway - A Song of Isolation by Michael J Malone 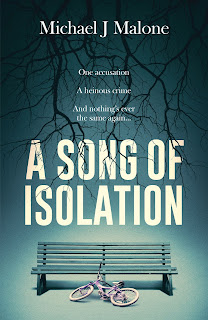 Today I'm delighted to be joining the blog tour for A Song of Isolation, the new novel from Michael J Malone (author of A Suitable Lie, House of Spines, and more). This time it's a giveaway - for a chance to read an e-copy of A Song of Isolation, just Tweet a link to this post (and @ me in so I know!) and I'll pick one person at random in a couple of days...

Film star Amelie Hart is the darling of the silver screen, appearing on the front pages of every newspaper. But at the peak of her fame she throws it all away for a regular guy with an ordinary job. The gossip columns are aghast: what happened to the woman who turned heads wherever she went?

Any hope the furore will die down are crushed when Amelie’s boyfriend Dave is arrested on charges of child sexual abuse. Dave strongly asserts his innocence, and when Amelie refuses to denounce him, the press furore quickly turns into physical violence, and she has to flee the country.
While Dave is locked up with the most depraved men in the country and Amelie is hiding on the continent, Damaris, the victim at the centre of the story, is also isolated – a child trying to make sense of an adult world...

Breathtakingly brutal, dark and immensely moving, A Song of Isolation looks beneath the magpie glimmer of celebrity to uncover a sinister world dominated by greed and lies, and the unfathomable destruction of innocent lives... in an instant.

Michael Malone is a prize-winning poet and author who was born and brought up in the heart of Burns’ country. He has published over 200 poems in literary magazines throughout the UK, including New Writing Scotland, Poetry Scotland and Markings. Blood Tears, his bestselling debut novel won the Pitlochry Prize from the Scottish Association of Writers. His psychological thriller, A Suitable Lie, was a number-one bestseller, and the critically acclaimed House of Spines, After He Died and In the Absence of Miracles soon followed suit. A former Regional Sales Manager (Faber & Faber) he has also worked as an IFA and a bookseller. Michael lives in Ayr.

A taste of what's inside...

Just give a taste of the story: this is certainly a dark story. It's inward looking, focussed on its participants - definitely not a police procedural, as you might expect from Amelie's boyfriend being taken away by police at the start of the novel. By then we've already see something of the darkness and obsession that follows film start Amelie, but we'll be introduced as well to Dave's background and to his emotionally buttoned up accountant father - as well, of course, as to Damaris.

What's about to happen is like a stone thrown into a pond. You see the ripples spread out, and the repercussions for this involved, how they deal with it. But run the film back - start with the ripples - and you get an image of the event that caused it all. Carry on backwards and and you'll see what went before...

If that's intrigued you - share the post, you may get lucky and get an e-copy to find out more from...

You can preorder A Song of Isolation from your local bookshop, or online from Hive Books, Blackwell's, Foyles, WH Smith, Waterstones or Amazon. Or see the Orenda website here. 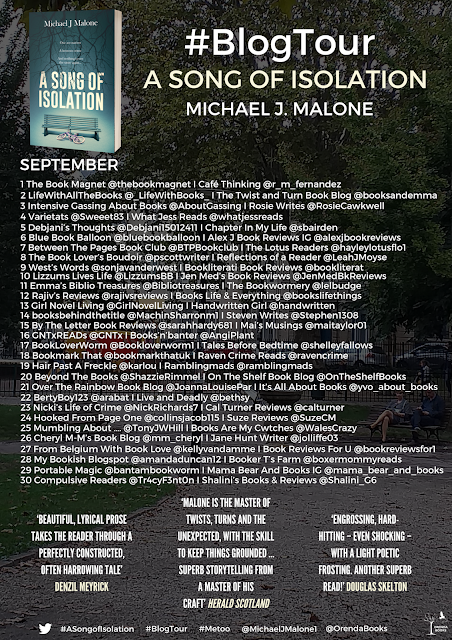