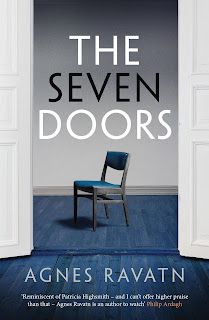 Today I'm joining the blogtour for Agnes Ravatn's new novel, The Seven Doors. I loved her The Bird Tribunal so when Anne asked me if I wanted to review this one I may have appeared alarmingly enthusiastic (even over email).

The books starts off low-key. Nina, a professor of literature in Bergen, and her husband Mads, a doctor who's taken time out to serve on the Town Council, are looking for a new house because theirs is on the route of a new tram line and is to be compulsorily purchased. They're not hard up (not even near - they have another house let out and a holiday cottage) but still they drive a hard bargain with the developers and, despite Nina's reservations over losing her lifetime home, begin searching for a new place. Meanwhile daughter Ingeborg is also househunting (she wants a bigger place). This sense of property, of ownership, of control is a theme that bubbles under the surface of The Seven Doors from start to finish, complemented by the references to the story of Bluebeard's Castle (which is where the title comes from).

Maybe it's all about the money (money, money). Nina and Mads get a good pay-off for moving out quickly. Mads' mother's funeral, recalled several years before, has been quietly forgotten (Nina doesn't remember whether she attended) but the house she bequeathed them features squarely. Ingeborg, in a truly toe-curling episode, hectors her parents' tenant, a single mother called Mari, to vacate her home as soon as possible - and then adds insult to injury by offering her, too, cash if only she will get lost and do it quickly.

Mari, however, perhaps fulfils this rather too literally - vanishing only days later. Nina, maybe a bit bored and dissatisfied with her students, has been sounding off about how studying literature provides the requisite skills for police work and decides to investigate. She's maybe also motivated a bit by guilt - Ingeborg's behaviour was truly awful and Nina's concerned that may have contributed to Mari's state of mind.

So Nina begins to probe not so much the young woman's disappearance but her life, personality and motivations - helped by a box of papers left behind in the house. She does this in between searching for property: one area where a translated book, inevitably, loses its nuance is the doubtless subtle shades of desirabilities and cost in locations - but it's clear enough that Nina and Mads are pretty choosy.

In a fairly short book, Ravatn manages to create a vivid picture of Mari, even though we only actually see her briefly so that almost everything we know is mediated though others - parents, an ex-husband - who are all deeply unreliable narrators. We're teased with the knowledge we might need to solve the puzzle - those references to Bluebird's Castle, which create a nicely taut atmosphere of secrets and lies, and Nina's conversations with a colleague about Freudian analysis and transference. It all hints at suppressed truths and abusive relationships, of boundaries crossed. What was really going on in Mari's life? Why did she break with her parents and give up her career? In the end this book isn't a logical puzzle - to be solved through clues and witnesses - so much as a psychological one, bearing out Nina's impassioned defence of her subject, of the value of empathy and of insights into human nature.

It's a compelling story which maintains a high pitch of emotion throughout. The characters are brilliantly realised people of a certain type, often people with an outward front and somewhat chilly aspect - perhaps not very likeable but deeply fascinating - and, as I have said, it trades heavily on property locations, family inheritances and control. Rosie Hedger's translation is lucid and unobtrusive, including when rendering what must have been some tricky points depending on rhymes and misunderstandings, and makes for smooth, page-turning reading.

Overall, a thoroughly enjoyable psychological thriller with some dark insights into human nature.

You can buy The Seven Doors from your local bookshop, or online from Hive Books (who support local shops), Blackwell's, Foyles, WH Smith, Waterstones or Amazon.

For more information about the book see the Orenda Books website here. 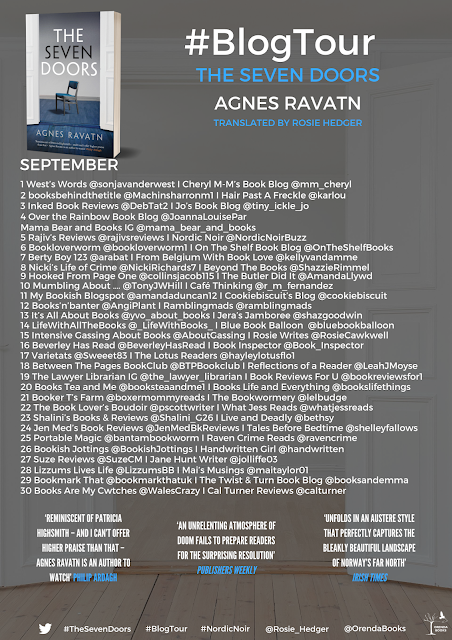