Review - The Nobody People by Bob Proehl 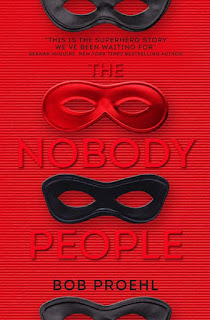 I'm very grateful to Titan Books for an advance copy of The Nobody People to consider for review.

This book was originally planned to come out earlier this year and like many others, it has been delayed due too You Know What. I've been waiting impatiently to share just how good it is - and now I can!

Set in a near-future USA over some ten years, this is a book of epic scale about prejudice and the slide into what can only be called fascism. Framed round the treatment of those - "Resonants" - who possess what might in other stories be called superpowers it isn't about them as cardboard cutout heroes and villains but more about how we accept - or don't - difference. Ringing deeply true, The Nobody People doesn't, of course, have to make this up, rather it can reference what has actually happened (and indeed, 2020 of all years, what is happening now).

But it's about more than that. The Nobody People is, as I have said, wide-ranging and also addresses family, growing up, assimilation and more. Our first introduction to this world is through journalist Avi Hirsch, wife Kay and young (six or seven when the story begins) daughter Emmeline. Avi's just been given the first tip that will lead the three of them into the USA of the Resonants and we see him follow that up, learning more about them and increasingly trading on his relationship and knowledge. He's perhaps the classic iffy ally, slightly self satisfied about how accepting he is, exploiting his "in" status professionally and personally, but also frustrated that he can't, in the end, be one of them. (At times he comes across as petulant and entitled. At the same time, he's suffering himself having g lost a limb in Iraq and Proehl depicts the consequences of that, the PSTD and guilt and how this loss affects Avi's sense of himself and his place within his family.)

And yes, I'm using the language of marginalisation and allyship here, if advisedly, because Proehl's book invites those comparisons, building on the infrastructure of oppression and discrimination in US law and society and referencing, implicitly and explicitly, not only the treatment of African Americans but also of Japanese American internees in the 1940s and of Muslims after September 11th - the latter, especially, through the character of Fahima, a young Muslin woman whose father and uncle were arrested and "disappeared" on flimsy pretexts. Along the way we see prejudiced cops, vigilantes and militias, on-the-make politicians, talk show hosts determined to exploit the situation and that most frustrating of figures, the reasonable man, who just thinks the way ahead is to invite both "sides" to a dialogue. Proehl identifies and shoots down the false equivalence in that:

'Fatima's no psychic, but she can see through the senator's thinking. It's a standard ally line of thought... It ignores a major inequality.... The ally assumes these are viewpoints, meeting on equal ground. No. One person is right, one is wrong. One person wants to be, one wishes the other was dead.'

We also meet Kevin Bishop. And he is an enigma. Maybe he is THE enigma here. A leading light among the Resonants, perhaps the oldest of them, Bishop's earlier life is only hinted at but it seems he Knows Stuff about their origin and, perhaps, future. It's his project to bring them out into the open and it's him who has founded a specialist school (in New York City) to teach young Resonants. The Bishop Academy is a much, much more grittily depicted school for supernaturally gifted kids than Hogwarts, by the way. Proehl's portrayal of the students, many of them teenagers, has the rawness and awkwardness (half self-assurance, half paralysing doubt) of that age. He does a brilliant job of integrating the obvious oddness arising from their "abilities" (and from the treatment they've had from communities and family) with the ordinary oddness of teen life.

This is a book that takes its time, introducing its world and grounding us in its reality. Proehl establishes the actuality of Resonance, never discussed as magic or in fantastical terms but as science (albeit bizarre science) with Fahima the experimenter, inventor and geek who can translate the ability to fly, project a death ray or bilocate, into plausible science. He also establishes the actuality of a gnawing, entitled hatred, always just a heartbeat from power and control, that operates at the most mundane levels of society - people looking the other when a woman is bundled into an unmannered van - as well as stalking Senate corridors and police canteens.

It's a disturbing, unsettling view of modernity in which the real horrors are not actually these with scary superpowers, not even those who put such powers to harmful use, but the great, placid mass of unsocial, ordinary people. A very timely picture, really.

Now, after not being able to wait to share this review, now I can't wait to read the concluding part, The Somebody People.

For more information about The Nobody People, see the Titan Books webpage here.