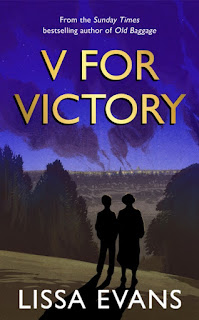 I'm grateful to the publisher for an advance copy of V For Victory via Netgalley.

V For Victory sees Evans return to the characters she created and nurtured in Crooked Heart and Old Baggage. It's late 1944 and a bitterly cold winter. Vee and Noel are living in Mattie's old house in Hampstead, making ends meet by renting rooms to lodgers. Vee, you may recall, took the identity of Noel's frosty Aunt Margery at the end of Crooked Heart - so, especially in a wartime environment of regulations, identity checks and officialdom, she's never (at least in her own mind) more than heartbeat away from exposure and ruin (Vee looks, she muses, 'like the "before" illustration in an advertisement for nerve tonic')  even if she was acting with the best of intentions.

I just love Noel and Vee - precocious child-going-on-adult (Vee reflects that girls and 'grown women went out of their way to talk to him... maybe because... he actually listened to people; he wasn't just waiting to tip in his own comments...') and and hardened ne'er-do-well with a heart of gold, they may seem ill assorted but their relationship is wonderful. Not quite mother and son, not quite partners in crime, they understand one another, fill gaps in each other's life and support one another. Noel's not attending school (that didn't work out well last time) but he's tutored by the lodgers (so Vee's requirements when letting rooms are very specific) who make up a delightful, off little community in Mattie's sprawling old house: the doctor, the journalist, the BBC presenter. They have their foibles and baggage and their own knowledge and experience to bring to this wise and funny and at times desperately sad book.

Noel and Vee aren't the only familiar faces here. I won't tell you everyone who turns up - spoilers! - but we do meet Winnie again, from Old Baggage, one of Mattie's Amazons. She's now commander of an ARP post, a role that seemed to be reducing in importance with the end of the Blitz- until the V1 and V2 attacks began. This book is punctuated by the roar of the rockets, the shaking of windows and the aftermath of a square or terrace being demolished.

Evans pays tribute in one extended and frankly moving sequence to the men and women who deal with the destruction and injury, when Winnie coordinates all the branches of civil defence after one attack. It's a celebration of ordinary men and women, of their organisation and management by one woman using hard-won knowledge and skill. In keeping with Crooked Heart, this is a very bottom up view of people surviving and coping. It isn't sentimental and there is no Vera Lynn soundtrack. The difficulties of life - shortages, cold, boredom (Everyone was bored of everything, really; it had all been going on for far too long') - are made plain, as are the ways people fall short, from grabbing more than one's share of potatoes at the dinner table to desertion from one's post and even getting away with causing a death. You won't find any heroes, just ordinary people doing what they must and hoping it will all end soon.

And trying to take a little happiness while they can. A central strand of the book concerns Vee's dalliance with a jovial American serviceman, a presence who threatens to drive a wedge between Vee and Noel - troubling as their is the central relationship of the book and they still depend so much on each other. Evans treats this very well and sensitively, conveying - without actually telling us - how much Vee needs a little glamour in her life and how much Noel, however outwardly confident and knowledgeable he seems, is still desperately insecure and fearful that the little haven he and Vee have found will be destroyed, as his life with Mattie was.

Evans is such a sharp writer, content to show and then leave us a moment of silence to take in what she's showing, ready with well-observed details ('bringing a cylinder of cold air into the room with her') as well some gorgeous scenes ('the Vale of Health magnesium grey under a three-quarter moon' or the mumbling publisher whose speech at a party sounds like a sequence of throat-clearing) and moments that are just, well, true - as when one character remarks that the end of a war is something that you only see once in a lifetime and another character quietly points out that, no, for many present, that's not right.

As well as reminding us of the aftereffects of that earlier war (not least in the characters who still suffer trauma from it)  the book looks forward, both nationally ('There'll need to be a big shake-up when this is all over') and individually - by the end, we see the figures we've come to know well and, in some cases, even to love, facing up to change, to losing roles they've grown up into ('she herself... a woman in charge of men - would suddenly be in charge of nothing at all') or adopting new ones. With the end of the war, lovers, husbands, others who were thought lost, will turn up, relationships will have to be reworked and sometimes, started over again. It's an uncertain time. Our friends here may, as Churchill eventually said (there's a running joke about him still writing hs speech) be allowed a brief moment of rejoicing but it's an uncertain future. (I hope Lissa Evens might though return to document it - I have a picture in my head of Noel as a young man, just graduated perhaps, at the Festival of Britain...)

Best of all, perhaps, it the little impromptu memorial at the end to Mattie, who was the central character in Old Baggage but was lost to us early in Crooked Heart. Her grave is, we learn still kept fresh and I think something came into my eye as Noel and a friend remember and sing "March of the Women" together.

A wonderful book, which you just have to read.