#Blogtour #Review - This Green and Pleasant land by Ayisha Malik 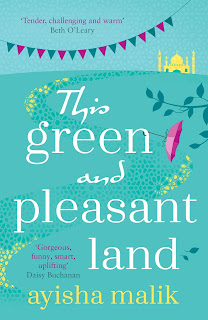 I'm grateful to Tracy Fenton for inviting me to take part in the Compulsive Readers blogtour for This Green and Pleasant Land.

In this novel Ayisha Malik brings together - with some glee, I think - what are often thought of as contrasting, even clashing, cultures within this, our sceptr'd isle. The villagers of idyllic(?)  Babbel's End have accepted, even welcomed, Bilal Hasham and his wife Miriam into their community, just as Bilal, a fairly non observant Muslim, has enjoyed the distance from his home town of Birmingham - and from scrutiny from his aunts and mother. But when Bilal, reexamining his life after his mother's death, decides to carry out her last wish and build a mosque in the village - well, things change...

I have to confess that I live in a village rather like Babbel's End (a significant name, you might think) and my wife is a vicar, so reading this book I did, as people say these days, feel seen. Change doesn't come easily in such places and Bilal ("Bill") hardly makes it easier by setting out his plan, with no warning, at a public meeting. Indeed, by not actually having much of a plan - he's not clear where the mosque will be, what it will cost, how it will be run (he's surprised, for example, to discover subsequently that he will need an imam).

But this isn't just about change, however well or badly handled, is it? The intention to build a mosque is seen as a cultural challenge, as something unprecedented, threatening and unwelcome. At risk of digressing, I'd answer that by pointing out that the English countryside has seen centuries of change, both religious and social: far from being a rural oasis of calm, the fields, cottages, churches and chapels have been contested, reworked and reinvented over hundreds of years. The conflict and confrontation that Malik sketches here is fully in keeping with that history and even rather tame compared with parts of our history, and the good folk of Babbel's End might need to learn a few things about that.

Of course, in This Green and Pleasant Land, battle lines are soon drawn, petitions planned and friendships strained. There's an undercurrent of fear and panic: more than a dash of racism too, if we're honest. But Malik gives us much more than that. In the first third of the book we're introduced to a dizzying cast of characters, and to the strains and tensions arising from their lives. In Babbel's End we meet vicar Richard, who's not, I think, entirely comfortable in his vocation, as well as Shelley, queen of the Parish Council, the splendidly lugubrious Tom, the closeted George Copperthwaite and Jenny, editor of the West Plimpington Gazette.

There is grief and strain in the village, with the recent death of a teenage boy, as the story opens.  Malik shows us how families and friendships were already fractured and strained - marriages under pressure, Miriam alienated from her best friend Anne and besset by her own doubts about Bilal and her first love, Raif - before mention of the mosque. And besides Bilal and Mariam, back at home in Birmingham we glimpse Bilal's mother, his Aunt Rukhsana, and a history of strong women bringing up their kids in the absence of husbands (a theme of this book, something occurring in both communities).

Without this fascinating tapestry of lives and backgrounds, This Green and Pleasant Land might be in danger of falling into the whimsy of an Ealing comedy - a high concept dispute with an air of the absurd and little more. With it, there's emotional depth behind almost every passage, every sentence. The external conflict - which rapidly turns into a cause celèbre in the national media, social media and local gossip - mirrors internal doubts, missteps and frailties in Bilal's family, among his supporters and between the opponents of the mosque.

I loved the personalities that we see here - their histories, griefs and friendships. Best of all perhaps is Aunt Rukhsana, an ordinary seeming woman, apparently bypassed by life but with a wonderful determination - not a great English speaker, on arrival in Babbel's End she determines to learn the language so that she can speak to the friend she meets when out walking. Rukhsana also writes poetry, and tries to counteract Bilal's wilder fits of enthusiasm on occasion. She's a great force of life and drives much of this story.

The story itself, which does have its comic side at times, grows into an exploration of faith, belonging and identify, but also of the lengths people will go to get what they want.  Malik shows (without labouring the point) how motivations grow and diverge from their ostensible roots: Bilal's plans never quite ring true as having a religious basis, I think that there's more guilt about his mother here, a sense of duty and of a certain sort of middle aged male restlessness. Some of those in the community who support him seem to be doing so out of a sense of bloody mindedness (Tom) while among the opponents, Shelley seems increasingly conflicted as events whirl our of control and unpleasant feelings and passions attach to the campaign. Some of her faction seen more passionate about opposing the mosque the less likely they are to ever bee seen in church. Again this rings true, a certain type of cultural jingoism and fake (and ignorant) religiosity driving debate rather than genuine feeling and knowledge.

Just how might that toxicity be overcome? What are Ayisha Malik's answers? They aren't glib or easy. Celebrating, above all, the value of kindness, reasonableness and friendship this is I think in the end an optimistic book, one that doesn't deny the differences between people but which draws how much more is that unites us all. This Green and Pleasant Land is sharp and well-imagined. It was a great pleasure to read and I'd recommend it unreservedly.

For more information about This Green and Pleasant Land, see the publisher's website here. And don't forget the blogtour stops coming up (see the poster below) for more insights into the book!

You can buy This Green and Pleasant Land from your local highstreet bookshop, or online from Hive Books - who support local bookshops - Blackwell's, Foyles, WH Smith, Waterstones or Amazon. 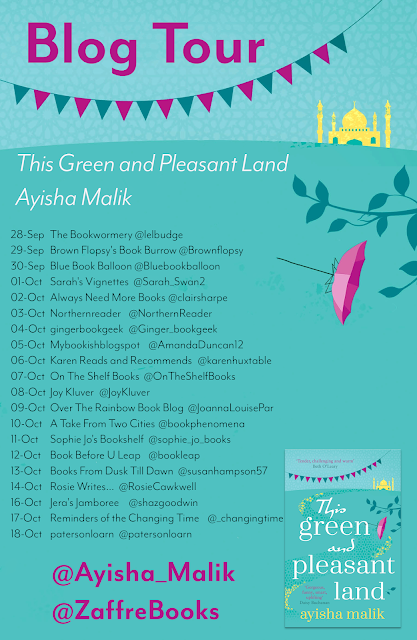