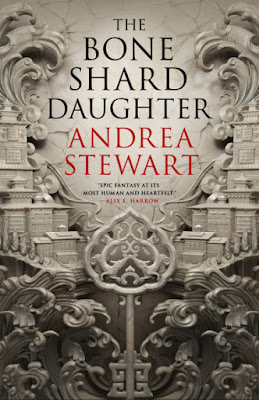 I'm grateful to Nazia at Orbit for an advance copy of The Bone Shard Daughter to consider for review and to Tracy Fenton of Compulsive Readers for inviting me to take part in the tour.

The Bone Shard Daughter has just everything you need in your fantasy. There are complex, relatable characters, a world so well developed and portrayed that you can just luxuriate in it (seriously - I want to skip lockdown and go and stay on a floating island) and an enthralling plot that will seize you from the first page.

There are in fact, four plots. FOUR!

First we meet Lin, cloistered daughter of the Emperor, but seemingly a failed daughter because she's lost her memory and can't learn his bone shard magic.

Then Jovis, who at first seems the kind of rogue who abounds in fantasy - a thief, smuggler and chancer on the run from the authorities and from crime gang the Ioph Carn. But Jovis proves to have depths and motivations to him and to be embarked on a quest of his own.

And finally, Phalue. What can I say about Phalue? She's a headstrong young woman, a fighter and a lover (not above wearing her armour specifically to impress her partner Ranami), a bit confused, idealistic - and the indulged daughter of her island's Governor.

Stewart's approach is to spin highly engaging and fast-paced stories for all four protagonists, using the light each of these casts on different aspects of the invented world to fill out the overall picture. It means the book takes off right away, with little or no hiatus when it switches focus between the four (always a risk when they are many points of view) as we come from each strand into the next with an enlarged sense of what is going on. And equally there is something for everyone here: palace intrigue, revolutionaries seeking to free an oppressed peasantry, romance, a cruel emperor (his "constructs" - artificial beasts who acts as spies or agents - are powered by bone shards taken from children when they come of age. The life-force of the constructs drains the originator of the shard of life and vigour until they eventually die). And much, much more (FLOATING ISLANDS!)

Each of the four central characters has their own mystery (or mysteries) and it's pretty clear that not everything is as it seems. The apparently stable order guaranteed by the Emperor may be about to crumble, with other powers crowding into the islands, causing disasters and change. We will see, I'm sure, in future books exactly how Lin, Jovis, Phalue and Sand fit in with that and how - whether - they reconcile their different quests and needs. Meanwhile, The Bone Shard Daughter offers us some wonderful relationships - Lin with her prickly, reclusive father (who has brought in a foster son to jostle with her for the throne), Phalue and Ranami, two women obviously in love but constantly bickering about politics and much else, Jovis, absorbed in his endless quest yet constantly going out of his way to save people (and animals!) Perhaps they fill a gap in his life, make up for a loss, or perhaps they help him fend off some awful truth about whatever he's looking for? And Sand, who we see least of, but who achieves a lot despite her exile to a remote island.

Put simply, The Bone Shard Daughter is the strongest start to a fantasy trilogy I've read for a long time, and I'll watch out keenly for the next part because these characters really speak to me - as well as the background of floating islands migrating under wind and tide in the endless ocean. Put this one to the top of your reading pile.

For more information about The Bone Shard Daughter, see the publisher's website here (as well as dropping in on the blog tour stops listed in the poster below!)

You can buy the book from your local hughstreet bookshop, or online from Hive Books, Blackwell's, Foyles, WH Smith, Waterstones or Amazon. 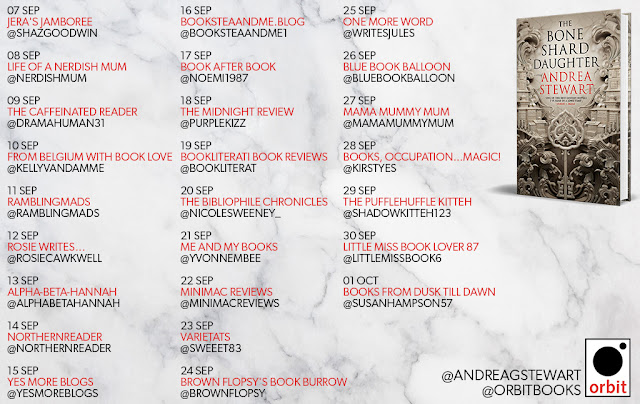