Another couple of of pages from my teenage reading notes. (For the first part see here).

There's only one date on this - summer '84 - and I can clearly remember reading at least one of these books (The Mind of Mr J G Reeder) in gaps while I revised for my O levels that summer. 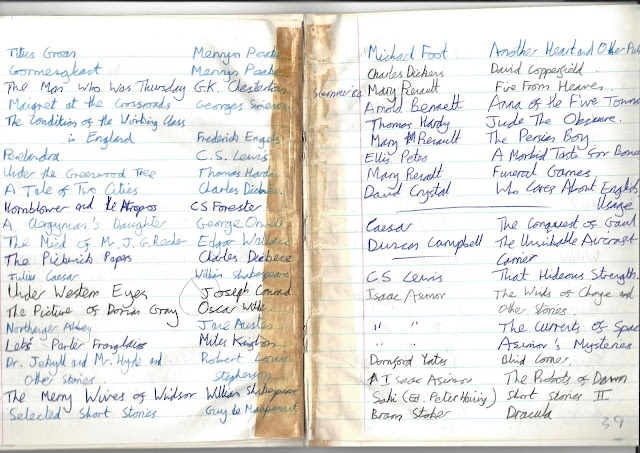 I can see that I was still reading some of the books on the list that my English teacher handed out (The Man Who Was Thursday, The Picture of Dorian Grey, the Maupassant short stories). I had just found my way into Dickens, with A Tale of Two Cities and Pickwick Papers). I was at a low point in reading Hardy, with Jude the Obscure which is just so miserable - I had enjoyed Under Greenwood Tree far more.

I can remember buying one of the books on this list - we went away for a family holiday, just me and my parents, staying at Lancaster University in the student accommodation (a tower block in the middle of their campus). It didn't occur to me at the time but it must have been an economical holiday. Anyway, I found the university bookshop and that's where I bought A Morbid Taste for Bones by Ellis Peters. It proved a delightful book, despite the preposterous comparison on the cover to The Name of Rose (which I don't think I'd read then anyway). That was a great series and several years later I actually wrote to Peters asking about a detail of the history - and she replied to me - the first time, I think, I'd had any contact with an author. (While we were staying in Lancaster there was a mild earthquake in England - which I somehow missed, despite the fact we were 10 stories up).

I don't know what I was doing reading The Conquest of Gaul, really I don't. It was nothing to do with the having read the Shakespeare play and wasn't actually doing Latin. (Our French teacher tried to get a few of us to do Latin as an extra thing at lunchtime and we might have managed one term or so but it fizzled out and probably a good thing - it would have been far too much).

Another book in here that dates the selection is Another Heart and Other Pulses by Michael Foot, which was essentially his account of the 1983 General Election in which he'd been the leader of Labour Party and which was disastrous for them. (Anyone who things 2015 was a catastrophe for Labour literally wasn't born) and the Duncan Campbell: this was the age of CND, nuclear nightmares and paranoia. (When, in my English Language O level the previous summer, we were prompted to write a story by photo of people who'd got out of their cars to look at something in the sky, I of course imagined apocalypse and annihilation).

I'm struck now by how mixed this selection of books is. There are classics, non-fiction, humour (the Miles Kington), 20th century staples like Mary Renault, science fiction, horror, muscular and faintly dodgy English pulpy stuff like Dornford Yates (if you were publishing a new edition of that now I bet you'd have to introduce some of it very carefully...)

No sign of me settling down and reading particular things, I'm hopping around and trying this and that. Well done 16 year old me.

Email ThisBlogThis!Share to TwitterShare to FacebookShare to Pinterest
Labels: 1984, my reading history