Review: When She Was Bad by Tammy Cohen 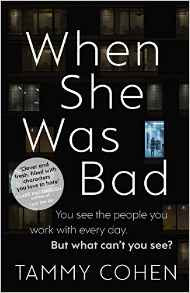 I was sent a copy of this book by the publisher.

This is a clever, atmospheric, creepy book.

It's almost two stories in one.

First we meet Anne. She has heard about something terrible on TV, reflects on her connection to it, going back years, decades, to how it all began. Anne, we learn, is a child psychologist, a professor who - a long time ago - was involved in dealing with the survivors of a horrific case of abuse.

She wonders if she made the right choices back then - and if the blame for what has happened will rebound on her now, destroying the life she's built for herself and her family. And as she does, she sets out her story - not only the events that she stepped into as a professional, but her background: the alcoholic mother, her own struggles in that direction (perhaps), self-doubt, career compromises. There's also the casual, ingrained sexism of the world (visiting a nursery with two male colleagues, they're immediately given the best chairs; her supervisor brought her into the case in the first place mainly because he didn't see her as a professional threat).

In the other story, we're introduced to a group of office workers - Paula, Gill (who's just been fired), Amira, Charlie, Chloe, Sarah, Ewan.

And Rachel. Rachel, the archetype of a heartless, driven boss.

Each has their own problems - money worries, divorce, loneliness, a difficult family background. We read about these in chapters focussed on each character except Rachel (the outsider, the threat). So we see different sides of the same events, and know more than any one of the characters. Cohen makes sure that while we might sympathise with all, we don't pick out any as heroes or villains - apart from Rachel. She's only seen through others' eyes and as a result, is the recipient of everyone's fear, loathing and hate. Indeed, Rachel and Anne are rather two poles of this book: one telling her own story (but is she telling all of it?) showing how she has limited her life to a degree, not gone for that top academic position (from self-doubt? family reasons? because of her struggle with alcohol). To know all is to forgive all... perhaps. We sympathise with Anne.

Rachel is the anti-Anne. We don't get much of her own story. She is brought in to lick the department into shape. There are hints of a disaster in a previous job, and she begins to shake things up, to set colleague against colleague, culminating in a team-bonding exercise which is toe-curlingly awful from beginning to end.

If there are no heroes in this book it's easy to cast Rachel as the villain. I think though you will sympathise with her by the end. (Certainly the way of things seems to be that managers brought in to lick things into shape as she clearly is soon move on afterwards, they aren't good at running what they've built).

Of course, these two threads collide in the end. I can't say exactly how that happens because that is really the mystery at the heart of this book. Cohen does a good job of planting red herrings and exploiting the ambiguity of her characters to keep you guessing right to the end what - or who - the link is. I certainly didn't get it. However, I did feel that the ending is then a little anticlimactic with the actual events (though ghastly) dealt with in a rather perfunctory way. I felt there might be more to be said, and perhaps there'll be a sequel that does that?

An excellent, character driven story that really skewers the drudgery of office life and shows the darkness that can lurk within the friendliest seeming colleague.