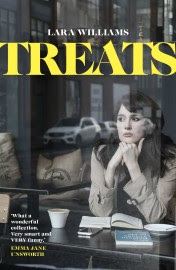 I bought my copy of this book from Waterstone's Oxford.

This is a very hard review to write. From time to time one finds a book that is so good you can only get the sense of it and understand why it is good by reading it. Any review will be a clumsy approximation to the thing itself and really ought to just say "go and read this!" but that's not really a very useful message. So here goes - this is why I loved these stories. And apologies to Lara Williams for mangling the sense of her beautiful writing.

The saying "don't judge a book by its cover" is often quoted and usually good advice. Covers can mislead - intentionally or by accident - and even where they don't, image and text are different media, so even a well done, honest cover may not help in signalling the content.

Sometimes, though, that saying is simply wrong and Lara Williams' Treats is a case in point. So I'm going to start my review of this wonderful, stunning book by describing the cover. Here is a young woman in a coat, sitting looking out of a cafe, thinking but not lost in thought. We are looking in (the reflection of the street is visible): she may be looking out or she may not. In front of her on the table are a cup of coffee, a phone, an open notebook and another book, Men Explain Things to Me, which is closed.

It's very clearly a moment in someone's life - a pause, I would say, perhaps, between two of the stories in this book - but also a detail. There's a powerful sense of this image as the small corner of a larger whole but one which carries the essential meaning of that whole. My first thought on seeing this book in the shop was that this was a very Edward Hopperish image. I love how Hopper captures a spirit of (not necessarily unpleasant) isolation in, especially, his urban, nighttime pictures.

That's the same feeling which, for me, comes off many of these stories and certainly the collection taken as a whole. They are, I think, the kind of stories that might describe the lives of the characters in Hopper's art: not necessarily the stories he'd have written but still a prose equivalent of his paintings.

The central figures here are - mostly - young women, shifting between jobs and partners, living in temporary places and temporary ways. There is always a sense though - a threat - that the temporary might, unlooked for, become permanent.

The stories are all short and some are very short, so that giving synopses risks telling too much. But for example, "It begins" (told in second person: you) describes coming back home after university, slotting into a disappointing life, settling for what's on offer. "A Lover's Guide to Meeting Shy Girls: Or; Break up Record" is about a young man, used to being the heartbreaker, who finds the tables turned. "One of Those Life Things" is another second person story (I wondered if all of these might have the same protagonist? It doesn't really matter) putting things together after a break-up. "Well if you don't want to live in hell" it ends "then I suggest you move." In "Both Boys" a woman manages not to choose between two friends but takes both - for a time.

My favourite (though it's hard to pick one - they're all good) is the titular "Treats", a slice of the life of a PA who has made a life for herself but wants more, specifically more kindness. She keeps on doing nice things for people, little unasked favours - paying for a cinema ticket for the girl behind her in the queue as she waits alone to celebrate her birthday, for example - but is slowly being disappointed: nothing comes back to her, she's still alone: but you can be kind to yourself, can't you?

William's characters negotiate life events - births, deaths, pregnancies, breaking up, getting together, moving in, moving out - with a degree of calm but also a degree of absence, an eye on the wider world: what comes next? Isn't there more than this? Her women cope better than the men, on the whole, but there's a sense in which everyone is sitting in that cafe, looking both in and out, waiting for the next thing. It's an essence of a very definite stage in life, mid twenties to mid thirties (and looking back at this period from later - where did all the time go?) counterpointed by the especial insecurity of that stage in the early 21st century.

I think these stories could be read by those passing through this period (here you are, there are lots of others doing this too!) or who, like me, are past that (look, this is how the new intern may be feeling) or more to the point by anybody who want to read about real people. They do, though, need to be experienced slowly and carefully - it's not a book to gobble but one to consume in nibbles: like the cover image the title is well chosen, these are good, if sometimes bitter, little rewards, perhaps.

So get a coffee, put down your phone, look away from the window for a bit and settle down for a treat.
Email ThisBlogThis!Share to TwitterShare to FacebookShare to Pinterest
Labels: 2016, bought, Lara Williams, modern fiction, review, Short stories