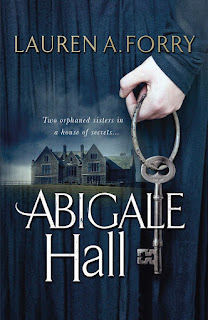 I was sent a copy of this book by the publisher for review.

On a foggy evening in 1947, seventeen-year-old Eliza and her troubled little sister Rebecca are banished by their aunt and sent to work at an isolated Welsh mansion. But there are rumours of missing maidservants and a ghost that stalks the deserted halls... Wandering through the mansion's dusty rooms, Eliza finds blood-spattered books, crumpled photographs and portraits of a mysterious woman clues to a terrible past that might just become Eliza's future.

As Eliza unravels a mystery that has endured for decades, Rebecca falls under the spell of cruel housekeeper Mrs Pollard, who will stop at nothing to keep the house's secrets. But can the sisters uncover the truth and escape back to London before they meet a dreadful fate?

This is a dark and delightful Gothic fantasy, all the more so for being set in the shabby postwar period rather than some lightning wracked Victorian pile. The story takes us to  both a bombed out and exhausted London and a decaying country house in deepest Wales - and when I say "tales", I mean just that, Forry's writing is visceral, dwelling on the smells of overcooked food, unwashed bodies, coal dust, mould and soot. (As well as some other, more specific smells that are key in the emotional lives of Eliza, Rebecca and Peter.) It transforts the reader. One can almost feel the stiff, sweaty 40s clothes her characters wear and feel the hunger as they survive on thin rations. And she has a wicked ability to throw in the odd sinister detail, almost as an afterthought:

She escorts him though the house, making note of her chores as she goes: light the fire in the bedroom, order more coal for the east wing, scrub the blood from the floorboards. There is much to do in a large house such as this.

The war and its aftermath play a large part in the book. Apart from the material deprivation, everyone here has mental scars. Peter's older brothers served and came back, variously, with Falstaffian stories of glory or shell-shocked and damaged ("[Michael] knew how dangerous leaving the house could be. Peter felt trapped. Michael said it was better being a moving target...") Eliza and Rebecca's parents died, leaving them damaged too, as did the experience of evacuation that the girls went through.

Eliza and Rebecca. There's something strange about those two. While not first person, most of the story is told from Eliza's point of view, and hers is a slippery viewpoint. Eliza is the strong one, left to look after her sister - poor, damaged Rebecca, whose behaviour was already odd before the war but seems even stranger here. Rebecca has an obsession with counting (to twenty three) and a distinct lack of affect. In modern terms one might perhaps categorise her as learning disabled. Perhaps: she remains an enigma. As readers of this blog may be aware I have a daughter with learning disabilities and I was drawn to Rebecca and very sympathetic to Eliza's situation, trying to do her best for her sister and yet suffering from feelings of guilt for not always being the saint she's expected to be.

Eliza is particularly afraid of what the enforced move to Wales may do to Rebecca. While her show of sisterly devotion is touching it becomes clear that it wasn't always like that. And Eliza is far from straightforward, showing distinct signs of OCD herself, forever cleaning her hands, fantasising about dust mites, coal dust and germs invading her body.  When she begins to suspect that something bad is going on at Thornecroft, rather than looking for the immediate threat that seems to be under her nose, she concocts a truly gothic fantasy - a fantasy within the fantasy - of ghosts, forced marriage and revenge. In some respects Eliza's hold on reality is weaker than that of Rebecca, who soon settles well in her new home.

Meanwhile, in London, faithful Peter, Eliza's would-be fiancé, falls into a world more like that of Brighton Rock than The Castle of Otranto as his search for Eliza leads him to a substratum of spivs, good-time girls, gambling dens and thugs. He's in as much danger as the girls - in some ways more, since he's unknowing, an innocent at home.

In a narrative that powers along, Forry piles on the tension until the final dramatic moments of the story, with surprises to the very end. A happy ending seems unlikely...

An exciting and gripping read. A few terms are out of place - "okay", truck for lorry - but overall the period detail convinces and the evocation of the 40s is so tangible that after reading the book you may well want to wash your hands - perhaps even 23 times...
Email ThisBlogThis!Share to TwitterShare to FacebookShare to Pinterest
Labels: 1940s, 2016, gothic, historical, Lauren A Forry, review