Blogtour review: in her wake by Amanda Jennings 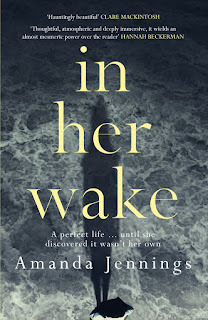 A perfect life … until she discovered it wasn’t her own.

A tragic family event reveals devastating news that rips apart Bella’s comfortable existence. Embarking on a personal journey to uncover the truth, she faces a series of traumatic discoveries that take her to the ruggedly beautiful Cornish coast...

I'm grateful to Orenda for a review copy of this book.

This wonderful book is tricky to review for two reasons.

First, while it's not a plot heavy, twisty thriller (...but see below...) there are aspects of the plot that you need to discover gradually as you read it, and which would be spoiled by a too detailed summary in a review. So you won't get much more detail than the above, I'm afraid.

Secondly, and I think this is very important to understanding it, this is not a book where you can just say 'it's a tense psychological drama', "it's a thriller", "it's a story about growing up and coming home" and then expound for a few hundred words on why it is one of those things and why it is a good example of the thing. That would be like saying "here is a tree... and here's another, smaller, tree... and here's a gap between some trees" when you're trying to describe a wood. The truth is that in her wake (capitalisation as on the cover ) is all of these things, and more, but none of those labels are particularly helpful.

So what can one say?

Jumping right in, I think it's about identity. The hero of the book - and I use the term carefully: she's a hero, not a mere protagonist, main character or anything else - is Bella, anxious, slightly crushed daughter of Elaine and Henry, bossed around wife of David (ouch), accustomed to be being looked after - and told what to do.

She is also Tori, the risk taker, a girl who doesn't mind getting into a bit of trouble, who'll have sex with a stranger on a whim at a beach party. And she's Morveren, daughter of the mermaid king, a creature of sea myth and legend, who comes and goes - and may or may not be real.

I don't think it's revealing too much to say that the centre of the book is the relationship between these three persons, these three aspects, and the struggle of each to be expressed, with everything hanging, as it were, on the achievement of some balance between them (or integration of them? is that the same thing?)

And a great deal is at stake. There is a mystery here (so yes, it's a mystery!) and although it seems to have villains and victims (there is crime!) as things are unpicked we gradually see everyone's motivations from various directions which even if it doesn't justify, helps explain, what happened. Bella/ Tori/ Morveren can't change what has happened - nobody can (and arguably it was a refusal to accept life as it was, not try and change things that led to a terrible thing, and set the events of the book in motion). But if she is to have a life in the future she needs to resolve the effect of that on her. Of the strict, controlling mother, home educating a lonely child in a remote house with high garden walls. Of the older man who married her and in many respects took over as her jailer.

There are others whose lives have been affected by what happened too but it would risk giving to much away to say exactly who they are and how they relate to Tori/ Morveren/ Bella.  They are, though, perfectly realised characters, indeed Jennings portrays all her characters with rare skill, with an eye for a telling detail that establishes who they are and what they're like. For example, look out for David's fussy checking of his wife's seatbelt, the attention paid by Henry to the locks and bolts on the door of his house and the bleachy cleanness of Dawn's house.

Jennings also powerfully evokes the landscape and atmosphere of Cornwall. I remember a childhood holiday in St Ives and her comments on the fudgy smell in the streets are spot on - not just as a description but as what a stranger would notice.  She's especially good on especially its weather, illustrated by a running dialogue with the coffee shop in who is trying to learn Cornish, most of which seems to be words for weather.

In short, this is a powerful and intriguingly different book. I can't and won't try to categorise it, but it hooked me and kept the pages whizzing by.

For other reviews, see the dates and details on the tour poster below. 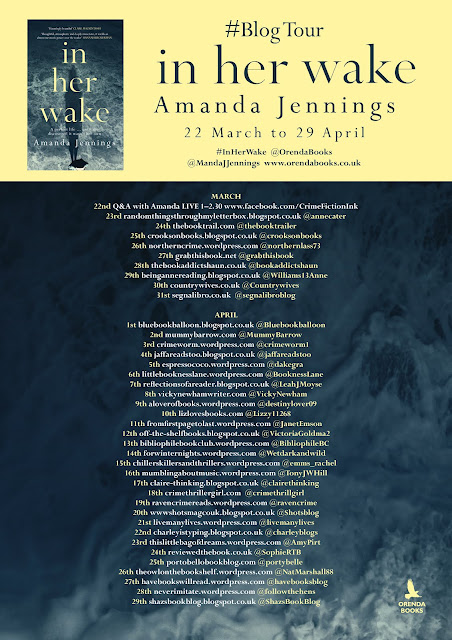