Review and Giveaway: This Census-Taker by China Miéville 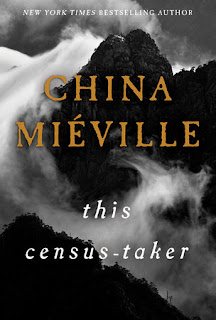 I bought my copy of this book. In fact I bought two (got a bit confused buying, doesn't everyone?) and I'll be giving away a signed copy - read on for details...

The first thing to say about This Census Taker is that it's a short book. The second is, despite that, it's not a quick read: it is difficult in places, allusive, with form conveying meaning as much as (or more than?) content. The narrator is tricksy - it's clear from one key passage that he's equally trying to conceal and to reveal, and what he's revealing is meant to be smuggled past layers upon layer of suspicious readers (including- perhaps - us).

Actually, it's books, not a book. A census-taker writes three: the text that is being explicitly formed here is his second, and the last to be made:

The manager of my line told me, You never put anything down except to be read. Every word ever written is written to be read... He said, You'll keep three books,

The framework seems simple enough. This is a story of boyhood, told by the man who was the boy. The boy lived up on a hillside above a small town. The man travelled with the "manager of his line", a census-taker, as apprentice, succeeding in that post to a woman whose notes and records he inherited. The book or books we have was or were written either at the behest of some authority (guards are posted outside his door as he writes) or as part of the census-taker's project, or both.

The wider background to the story is less clear. This could be our world after some catastrophe (conflict is mentioned but it seems remote) as there are modern concepts, diesel, a picture-house, generators - or it could be a different place altogether. This world also contains the fantastical:  children who angle for bats off a bridge, a man who makes keys that seem like magic charms, changing the weather, giving success in love or constraining lives in other ways. It is a brutal world in which people disappear and are not spoken of again.

More important than placing the action, though, is the atmosphere of weirdness that Miéville sustains, but which is frustratingly hard to convey in a review! Open the book at almost any page and you'll see what I mean. The people seem haunted, oppressed, going though motions that seem strangely circular - perhaps a bit like Gormenghast castle, but more democratic (there are no immediate authorities. When a crime is alleged, three citizens are deputed to investigate: a schoolteacher, a hunter, and a butcher). More than this, even the descriptions of everyday objects are stunted, warped, a bit off:

Houses built on bridges are scandals. A bridge wants not to be. If it could choose its shape, a bridge would be no shape, a space to link One-place-town to Another-place-town...

In part the book conveys this... I don't know... blankness through not naming anyone (not the boy, not his father or mother, not the census taker himself, not the teacher, hunter or butcher) apart from two other children, who become a refuge for the boy in trouble but can't ultimately save him. In part it's done through use of pronouns - the man telling the story refers to the boy sometimes as "I", sometimes as "you" and sometimes as "he". I've assumed that he is the boy, which makes sense in the frame of the story, and as the different pronouns are used even in a single paragraph, but who can really say? I think there may be other games here, meanings encoded at different levels.

At the centre of the story is, I think, memory. The book begins after the boy witnesses something terrible. He runs down to the town and tries to tell what he saw, but almost as soon as his word are spoken there begin to be assumptions, distortions

I didn't think she was describing what I'd seen, what I'd walked in on, but as she spoke I realised she was repeating what I'd told her.

The boy's stubborn recollection throughout the book - which sets in motion a whole train of events resulting in him being the man who is writing this book - then runs counter to his first words in this scene. But what is recollection and what is later reconstruction isn't clear: the rewriting is going on throughout the book, and the man - or the boy - is, as I said above, also playing games with meaning.

Is it possible to decode all this? I don't know. It's certainly a story that rewards rereading and re-rereading, working at the layers of meaning slowly and thoughtfully.

As I said, not a quick read - but such a rewarding one.

I promised a giveaway. I have a spare SIGNED copy of This Census-Taker. If you want a chance to win it, send an email with the subject line "This Census-Taker giveaway" to bluebookballoon at outlook dot com - I'll pick one at random on Saturday 9th April to get the book.  I'm afraid I can only post it to the UK or Ireland.