Spare me the Truth Blogtour: Guest post by CJ Carver 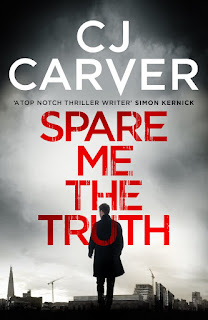 CJ Carver's new book Spare me the Truth is just out from Zaffre:


Dan Forrester, piecing his life back together after the tragic death of his son, is approached in a supermarket by a woman who tells him everything he remembers about his life - and his son - is a lie.

Grace Reavey, stricken by grief, is accosted at her mother's funeral. The threat is simple: pay the staggering sum her mother allegedly owed, or lose everything.

Lucy Davies has been forced from the Met by her own maverick behaviour. Desperate to prove herself in her new rural post, she's on the hunt for a killer - but this is no small town criminal.

Plunged into a conspiracy that will test each of them to their limits, these three strangers are brought together in their hunt for the truth, whatever it costs...

I'm excited that CJ herself has written a guest post in which she shares some of her secrets - so, over to CJ:

Five fundamentals that help me begin to write

(1) Know what the story’s about

For some, it’s character first but for me, writing thrillers, I need to know what my book is about before I start tapping on the keyboard.  In Spare Me the Truth it’s a real-life drug that can wipe away single, specific memories while leaving other memories intact.

So, I had a memory erasing drug but who was I going to use it on?  I needed a metaphor for honesty and incorruptibility and this kick-started my search for my main character Dan Forrester.

I then asked: what does Dan want badly?  Everything he knows has turned out to be a lie, so who can he trust? Dan’s search for the truth became the real engine of the book.

(2) Get to know your protagonist

A character isn’t a human being - we read about them as if they’re real, but they are superior, larger than life and their motivation comprehensible; whereas people we know are difficult to understand.  We know characters better than we know our friends.  In fact, I know Dan Forrester better than I know myself.  Dan is taciturn and self-contained.  I’m neither.

(3) Get to know your protagonist’s opponent(s)

I have to know who my main character is up against before I can move further.  I need to know their adversary almost better than the protagonist himself and keep them in mind through every stage of the plotting process – what motivates them, how life has shaped them, and also what they want badly and how far they will go for it.

Things start to get a little more detailed now, as I begin to dress my characters further.  Where they live, whether they’re married, have children, a dog.  Were they bullied at school or were they the bullies?  Teachers pets or rebels?  Or did they hide in the background?  I don’t write reams of biographies for them, but have a definite sense of each person.

I need to know the politics of my world.  What everyone does for a living.  What the values are. What the backstory is. All this takes time.  I don’t dream all this up and rush straight to the keyboard.  If it takes me nine months to write a book, six of those will be spent scribbling notes and mulling.

(5) Create a dramatic start to the story

This has to radically upset every aspect of the protagonist’s life.  As the story begins, the main character is living a pretty normal life but then an event occurs that turns everything upside-down.

For example, as the story starts in Spare Me The Truth, Dan is shopping for noodles in his local Tesco when a stranger approaches him saying he’s not who he thinks he is and that his family has been lying to him about how his baby son died.  He thinks the stranger’s crazy until he discovers they’re telling the truth.  His world as he currently knows it, suddenly ends.  Now, he has to react to it.  And that’s when the story starts and I can truly begin writing.

Spare Me The Truth is out now and you can find it at your local bookshop or online here or if you must, even here.

The blog tour continues - see the poster below for the other venues! 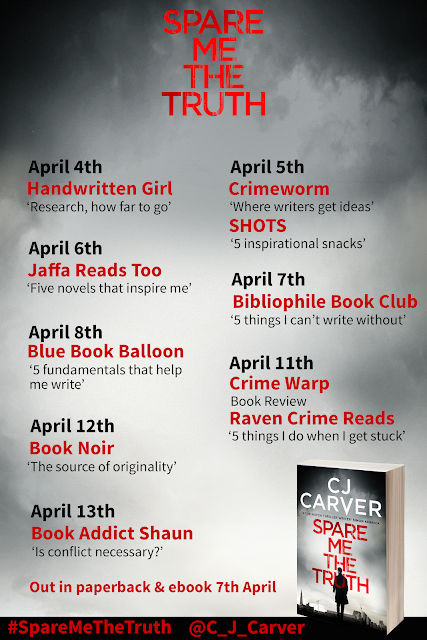