Review: The Death of An Owl by Paul Torday 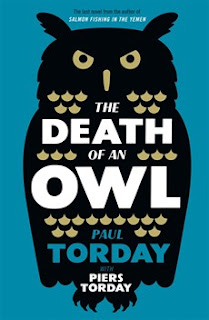 Andrew Landford is driving home one night, along a dark country lane, when a barn owl flies into his windscreen. It is an accident, nothing more. However Andrew is in line to be the country's next prime minister. And he has recently been appointed to a parliamentary committee concerned with the Wildlife and Countryside Act. Barn Owls are protected species, and it is a crime to kill one. If Andrew acknowledges that he has killed the owl, he could be risking his political career.

With Andrew in the car is his old Oxford friend and political adviser, Charles Fryerne. An expert in communications, Charles has just joined the team that is masterminding Andrew's route to the Tory Party leadership, and from there to No 10 Downing Street. He has spent many years quietly building up a very successful career as a strategist.

But the death of the owl threatens to destroy not only Andrew's career, but everything that Charles has worked for too. Should they come clean, or hide the story and hope it goes away?

I read an advance proof copy of this book.

I enjoyed Paul Torday's very English series of books about politicians, financiers, farmers, ex-soldiers and other (apparently) plain men (largely) navigating the late 20th and early 21st centuries and encountering, sometimes even being, the odd cad or bounder. A dash of CP Snow, a touch of Buchan, the odd spooky touch, served up with Torday's knack for making a rattling good story out of the most seemingly unpromising idea. So I was glad to see there would be a final book, finished by his son Piers, also a writer.

And this one is fun, easily up to the standard of the earlier novels, showing no sign of being a composite production: my only slight qualm would be that its political background is pretty clearly 2010 or 11, when, presumably, it was started. (How much has changed since then!)

Charles Fryerne is a classic Torday figure, a bit of a technocrat but solidly rooted in a wealthy (though not super wealthy) and influential (but not ruling) stratum of British - or I had better say English - society. Brought up as a citizen of the world, Charles lives in New York, Switzerland and other such glamorous places as his father moves around working for a multinational pharmaceutical firm.

Returning "home" Charles tries to fit in - studying (of course) at Oxford where he joins an exclusive dining club, punts amiably, gets together with the odd girlfriend - but he always seems an observer, an outsider, something that emphasised when his parents die, one soon after the other, seemingly of disappointment that the country they remembered had gone forever. Charles takes up a career as first a journalist then a "strategic communications adviser", famous (and successful) for his honest approach. Still, though, an outsider, an interpreter of us to ourselves rather than someone in his own right. The lack of identity is highlighted by Charles's "title", inherited from his Dad: "The Fryerne of Fryerne Court". Fryerne Court is long sold to pay debts from ill-advised investments, but the extended family still gather - from around the world - for significant family events.

While this may sound far-fetched, it's really not. My wife is a vicar, and in one of her previous parishes, descendants of a former prominent local family (house sold, again, in the 1920s) would occasionally appear on the Vicarage doorstep, anxious to know if the family plot in the churchyard was being kept up as it should. Im sure they all had families, lives to go back to, but a key part of their identity was in a village hundreds - or thousands - of miles from where they had settled. Torday portrays the dislocation of such people well: it's a theme he often turns to in his books but nowhere, I think, does he nail it quite so well as with Charles Fryerne.

Fryerne's real trial comes, of course, with the death of the titular owl.  This doesn't come in till nearly half way through the book, and brings Torday's political sub-plot up against darker, older, forces, but by then Fryerne is established as a vivid, if slightly annoying, character and this serves the second part of the book well. (Yes, I did find myself questioning the man's oft-repeated claim to straight dealing and truthtelling. That's what he tells you, but what we're shown is him behaving in a decidedly twisty way - not just professionally but personally too - just like all those other spin doctors).

By then, Fryerne has, finally, tried to move to the centre of things, advising an up-an-coming Tory MP who aims to be the next Party leader. (In this parallel world, which, as I said earlier, Torday must have begun sketching out soon after the 2010 election, the Conservatives are in Opposition and their leader - never named - is about to be brought down as a result of his failure to win a majority).

It all starts to go wrong, of course, and  both Fryerne and Landford begin to disintegrate. Of the two, Fryerne is the more interesting character - the book mostly follows him and we see things form his perspective - and there's a real jeopardy for him and for his wife Caroline. Whether it's Paul, Piers or both, the writing really makes the reader care about what happens: and the outcome is ambiguous, provisional.

As a final slice of Torday's take both on the dishonesty of the world of business and affairs, and on that beautiful Northumbrian country his books so often return to, this deserves to be widely read and will certainly be devoured by his fans.

If you're new to his works I wouldn't though begin with this one: start at the beginning with Salmon Fishing in the Yemen and read them all in order (they build up one on another) and save this till last.
Email ThisBlogThis!Share to TwitterShare to FacebookShare to Pinterest
Labels: 2016, modern, Paul Torday