Review: The Calling by Philip Caveney 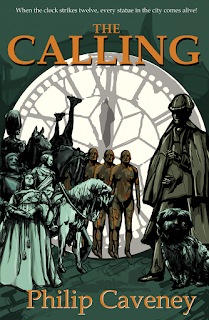 I'm grateful to the publisher for a copy of this book to review.

A boy wakes up on a train to Edinburgh.He is shocked to discover that no idea who he is or how he came to be on the train - and once off it, he finds himself immersed in the chaos of the Edinburgh Fringe. After a day of wandering the crowded streets, he falls asleep and is woken by the sound of bells tolling midnight - only to discover that is the night of The Calling - a magical yearly event when all the statues of the city come alive...

We don't learn the boy's name for some time, nor what led to him being on the train. Given the name Ed (short for "Ed Fest") he has to make friends among the statues and work out how to get home - and get himself out of the trouble he's in.

The statues are all duplicates of their originals - whether these were real people or creatures or imaginary ones (even fantastic, speculative creations like the Gormleys or the giraffe-like Dreaming Spires). They all have the prejudices and quirks that implies, and there's a lot of fun in, for example, the rivalry between the statues of Charles II and that of Queen Victoria. Edinburgh has a lot of statues, but sensibly, Caveney limits himself to a dozen or so of them (though this means we never get to meet John Knox which is a shame: perhaps he couldn't get out of New College) which makes things easier to manage.

The idea of statues coming alive - even for one night only - is definitely a creepy one and coping with it is a real challenge for Ed. They don't like the "softies" and don't want their secret revealed so  Charlie - or King Charles II to give him the correct title - wants to have Ed executed, leading to some thrilling adventures in which the boy is aided by Sherlock Holmes. Caveney uses the opportunity to explain who many of the historical figures were, including James Clerk Maxwell, Prince Albert and William Wallace. I think this is an excellent way to introduce some fascinating historical characters and events and to explain why these were commemorated. (He also has Queen Victoria point out the injustice that few of the statues are of women). There is even a map so that the reader can find them: a good way to explore Edinburgh, I think (and bring the statues alive in a different sense!)

Behind all this there is, of course, the mystery of Ed's memory loss and this is where Sherlock really comes into his own, the book illustrating, again, some of Holmes' ways of solving crimes and of working out what had happened. And of course it's useful to have seven foot bronze statue with you when the bad guys start firing arrows...

All in all a fun book, conveying the atmosphere of Edinburgh during the Festival in an unusual and entertaining way. It would be a good companion if you're visiting the city with children and want a bit more than the guidebooks offer, perhaps as a break from Festival-going or a way to structure a wander round. Ed is a resourceful hero who isn't above putting even the most crusty old statue in their place, but he learns a great deal in the course of his adventure.