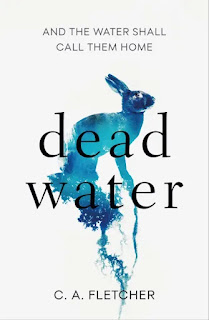 Dead Water
C A Fletcher
Orbit, 21 July 2022
Cover design by kid-ethic
Available as: HB, 501pp, e, audio
Source: Advance copy provided by Orbit
ISBN(HB): 9780356513836
I'm grateful to Nazia at Orbit for a free advance copy of Dead Water to consider for review.
Dead Water is an experience of a book, a whole body, heart-thumping, grabs-you-and-makes-you-finish-it story. It kept me riveted and sitting up reading on the hottest night of the year (only slightly because it took me to a seaswept, rain drenched location much more attractive than the stifling heat of global warming hit Oxfordshire).
It's not, though, a book that grabs with immediate action. Rather, the first half is slow and studied (and the better for it) introducing us to a cast of characters on a Scottish island (and to some visitors and incomers arriving on the ferry). A young woman who flirts with danger, freediving alone every morning because it's the only thing she can embrace in life after a series of tragedies. An elderly dog-walker who just happens to be there each day with his binoculars when Sig changes out of her wetsuit. Matt, a young fisherman, with whom Sig has history. A family arriving on the ferry to make a new life on the island - with tensions between stepmum and stepson marked. A shady character, travelling to the island for some purpose that requires him not to register in memory or CCTV gaze. And so on.
We learn about all these people and more, picking up the tensions, the histories, the hopes, the hates, that blossom and fester in any small community, and especially in a fairly isolated one. Among and behind this is a degree of foreshadowing: that ferry is described as an unlucky ship, there are near-accidents, talk of omens, unchancy happenings, and coincidences. It's less that these are things that happen to people, but markers for a world, or a worldview, which accommodates the less than rational (or the more than rational?) They are signposts, showing us that Sig's fiercely scientific outlook, acquired after a horrific loss, is set to be challenged.
A pair of ravens patrol the island, and a woman who may have the Sight wakes uneasy. Those themes bleed into a separate story told between the parts of the main one, the story of a young warrior, far from home, who trespasses against ancient custom and suffers a retribution. His connection to the island story slowly becomes clear and if you want to know a little more about what's going on, without too many spoilers, you might read those sections together as one. Quite aside from his part though in the wider tale he, also, contributes to the atmosphere of weirdness, representing a different, a more believing, even spiritual side of things than the mundane concerns of the islanders (fish catch, the spotty phone coverage, romantic entanglements).
There are then plenty of hints and scene setting to warn that something very strange will happen to those well-realised and fully three dimensional characters, and while some readers may think that makes it go too slowly and want the action to hurry up, I'd argue rather that the buildup gives us just what we need - a clear picture of the protagonists, hopes and fears for some (and in particular their dogs! I always worry when an author brings dogs into a story and Fletcher has form here) and a distrust of others. We get a sense of how they will behave, see how high the stakes might be, and then begin to follow the chain of events that will lead to...
Well, that'd be telling. It is a culmination fully worth waiting for and one which shouldn't be spoilers, pitting a small group of islanders against an implacable, because entitled and self-assured, enemy that they are ill-suited to defeat. Especially because of animosities, mistrusts and, well, just history stuff, which have been sketched earlier. But, Fletcher hasn't told us everything about everyone, nor have they all been completely honest with themselves. It takes the strain of extreme peril to surface some things that would otherwise have stayed submerged - and to make unlikely heroes. Once this begins to come together you'll know that you just have to go on reading, the writing becoming more and more arresting: the wild storm, the isolation and the lurking evil out there in the dark more and more impossible to resist. (A great book for a sweltering night, in fact!)
So I'd recommend, but do be aware the story doesn't start off with a bang.
It's better than that.
For more information about Dead Water, see the publisher's website here.
Email ThisBlogThis!Share to TwitterShare to FacebookShare to Pinterest
Labels: 2022, Dogs, Fantasy, folk horror, horror, islands, Scotland