#Review - The Redeemer by Victoria Goldman 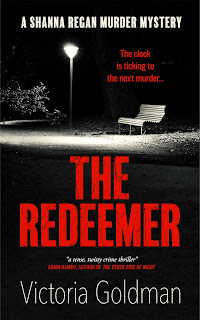 The Redeemer (Shanna Regan, 1)
Victoria Goldman
Three Crowns Publishing UK, 5 July 2022
Available as: PB,335pp,  e
Source: Free advance e-copy
ISBN(PB) 9781739695415
I'm grateful to the author for an advance copy of The Redeemer, her first novel featuring intrepid reporter Shanna Regan, to consider for review.
There's a lot going on in The Redeemer.
Set in the Hertfordshire town of Hillsbury, The Redeemer explores themes of anti-Semitism, diversity, identity... and revenge. It opens with action as Shanna, sitting musing on her favourite bench in the park, sees a woman being chased and attacked by a gang of teenagers. An anti-Semitic attack, as soon becomes clear.
Here in Hertfordshire.
What should Shanna do? What does she do?

Shanna's actions in these moments will lead her into an exploration of Hillsbury's Jewish population, and in turn to the revelation of a bizarre mystery in the form of commemorative plaques dotted around the town, apparently memorialising instances of murder - and of potential retribution. Understanding the community and its past may help her untangle what's going on, and save lives - or it may just draw her deeper in, risking exposure of her own secrets...

This is a fine crime story, with a - to me - fascinating and unfamiliar angle. Goldman (I should declare that I follow her on Twitter and we have met once or twice at bookish events) has been forthright about her concern over rising anti-Semitic incidents, and also what (my words not hers) one might describe as a backgrounding of the Jewish community in Britain, the latter contributing, by minimising and erasing, to the former. In this book, she sets out to reclaim a bit of space as it were, showing her Jewish characters going about their ordinary lives, their routines and customs being introduced to us as Shanna herself learns about them in the course of her investigation.

Shanna, I should explain, is a globetrotting investigative journalist who's travelled the world since she was eight, initially with her (Irish) engineer father, latterly alone and in pursuit of stories. Her career has now hit a bit of a bump and she's landed up editing a local magazine in Hillsbury. So one might expect her already to be aware of some of the details of Jewish life that are included here, nevertheless, I think that Goldman is fairly subtle in showing what the reader may not know, painting a picture of a vibrant and complex community - and of its enemies, who regrettably, also have to feature. (If you find yourself reading about some of the incidents described here and saying "Surely that kind of thing doesn't happen in Britain!" - and then wondering whether you would know anyway if it did - well, that's kind of why they have to feature).

The balance between what I suppose one might see as informing and as entertaining is of course a fine one and easy to get wrong but in my view Goldman negotiates it with assurance - so that while the wider context of The Redeemer gives this book a sense of passion and commitment, the story itself isn't swallowed up by that. It is, rather, an intricate and compelling crime story, in which, as details of the various deaths unfold, Shanna's compulsion to delve into some past events (those deaths in Hillsbury) perhaps in order to avoid others (mysteries about her own life that she doesn't want to explore) becomes clearer and clearer and the tension that embodies, ever harder to resolve.

External threats abound - anonymous messages and texts, the threatening presence of an ex boyfriend somewhere in the background, and even physical attacks, not least from that mob of racist teens - but for me, there was almost greater menace from Shanna's struggles with what she remembered of her past: guilty memories, some of them, also gaps and absences.

What starts as a simple investigation, albeit of some weird circumstances, becomes much more tangled, with a suspicion growing that what Shanna's getting into is not just of historical, academic influence but real, contemporary and very threatening.

All in all I think this is a fine start to a potential crime series - I love the confident positioning of this as "a" Shanna Regan mystery, which I take as a promise of more adventures, hopefully uncovering more of Shanna's background.