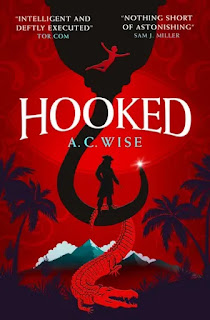 I'm grateful to Titan Books for an advance copy of Hooked to consider for review.

Hooked picks up Wise's continuation of the Peter Pan story, begun in Wendy, Darling which took Wendy back to Neverland when Pan carried off her daughter Jane.

Now Jane is grown up and a medical student, and on the eve of the Second World War, strange things begin to stir again in the London skies. Wendy and Jane aren't the only refugees from Neverland - and the monsters aren't quite done with them yet.

I greatly enjoyed the deft way that in the first book, Wise upended the story of everlasting, boyish fun to show a distinctly dark side, focussed on great Pan himself. In Hooked, she goes further still, showing how the consequences of what Pan is - was - radiate out like agitated waves in a pond. Much of the story centres around James, no longer Captain Hook, though that part of him hasn't totally gone away either. The fearsome Captain might seem an unlikely protagonist but Wise gives him so much depth - painting him as dastardly, yes, but also yearning and still very much lost. James is making a life with his beloved Samuel, the surgeon from his pirate ship, but is also drawn by his desire  for opium. The relationship between him and Samuel is delicately drawn, the life they would live shot through with baggage from Neverland. Will they ever escape?

Told both from the "now" of 1939 and in flashbacks to Hook's, and Jane's, earlier lives, we see how much Neverland keeps its grip, how it reaches out in the first place to bring in its victims. Everyone we see has reason to hate and fear the place but the knowledge of that deathless land still compels and bewitches those who have lost someone dear. Sometimes acknowledged, sometimes not, James, Wendy and Jane all have an eye on what Neverland might give them even while knowing the price that may be demanded.

The pressure of that knowledge combines with raw emotions - guilt, love, fear - to create an almost tangible sense of being torn (hooked, one might say) a tension that erupts especially between Jane and her mother - fuelled also by the events of the previous book and especially the fate of Timothy - but also drives an internal struggle in James. A monster himself, and also a victim, he's uniquely qualified to see the mayhem that Neverland may bring. He embodies a sort of no-man's land between misery and destructive self-pity and a call to be more, to be better. Perversely though, it may be the monster that is needed to confront Pan's last, questing, horror.

And a real horror it is, whether real or conjured by the guilt and terror of Wendy, Jane and James. Wise teases us as to what is really going on, showing how the London of 1939 is still haunted by all sorts of ghosts - including those from the Great War, Wendy's brother Michael carrying those with him layered atop the trauma of finding (and leaving) Neverland. As another war looms, Wendy and Michael hope that Jane will be protected form the horrors while she resents their over-protectiveness and lies.

Unfinished business abounds in this fine, troubling study of adulthood and lost childhoods.

A superb sequel, subtle, layered and patient in the spell it weaves.

For more information about Hooked, see the publisher's website here.