#Blogtour #Review - The Daughter of Doctor Moreau by Silvia Moreno-Garcia 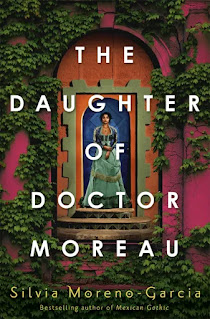 The Daughter of Doctor Moreau
Silvia Moreno-Garcia
Jo Fletcher Books, 19 July 2022
Cover by Faceout Studio/ Tim Green
Available as: HB, 305pp, audio, e
Source: Advance copy
ISBN(HB): 9781529417999
I'm grateful to Jo Fletcher Books for an advance copy of The Daughter of Doctor Moreau to consider for review and for inviting me to take part in the blog tour.
Set in Mexico in the later 19th century, The Daughter of Doctor Moreau picks up the central idea of HG Wells's novel of vivisection and species reshaping and relocates events to the Yucatán, a politically and culturally complicated region in the throes of a post-colonial uprising. (There's a slightly cheeky justification for this given in an ancient confusion about whether Yucatán was actually a peninsula or an island).
Bt there are also wide themes here. There's romance too, and at the centre, a determined and composed young woman who's growing into an understanding of herself and her place in the world - but hot altogether happy at what she finds.
Carlota Moreau lives with her father on a remote holding, Yaxaktun, along with a few servants and the population of "hybrids" that her father has created through his experiments. Fully realised, they have hopes and desires as well as fears and afflictions, and are portrayed in a manner that takes our understanding of them far beyond their counterparts in Wells's book. Carlota is devoted to her father, obedient, and alive to the suffering of the hybrids (she's picked up some medicine and helps care for them). She has been brought up pretty much in isolation, but will need, in this story, to grow up quickly and cope with a crisis in her little world (she proves resourceful and tough).
An early arrival in the story is Montgomery Laughton, an English adventurer much addicted to drink and gambling, who's drifted from one shady occupation to another. Laughton is mourning the loss of his beloved wife and taking rather too many risks as a result. Moreno-Garcia's portrayal of Laughton is sensitive and convincing, bringing out both his ruthlessness and "man of action" person and also his inner turmoil and despair.
Laughton becomes mayordomo of Yaxaktun, managing the house and the estate, thereby bringing him into contact with Carlota and conflict with Hernando Lizalde who finances the whole operation. Lizard is a wealthy landowner who wishes to use Moreau's hybrids as labour on his farms, replacing the local Maya people who are beginning to stand up for their rights.
Chapters are narrated from the perspectives of Carlota and of Laughton. Yes, of course there is SOMETHING between them, but Laughton is so damaged, and Carlota so inexperienced, that misunderstandings and distractions - not least the rapidly spiralling catastrophe spawned by Eduardo, Lizalde's headstrong son - keep tuning things round and b ringing the two into conflict.
Written with great verve, I found this a rattling good story that features not only all the above but also the uprising by the indigenous Maya people, colonial politics (the British are just offstage, always looking for some advantage) and - at the centre of this thoughtful and thought-provoking novel - questions of identity, morality and destiny. It's a book where the villains, if one can use the word, are complex, the heroes, again if I can describe them so, have feet of clay, and those from whom one might not expect to hear, are articulate. Another book from an author who seems able to write b brilliantly in any genre she chooses, and one which highlights history and culture with which I was completely unfamiliar and delighted to learn about.
For more information about The Daughter of Doctor Moreau, see the publisher's website here or any of the other entries on the blog tour - see the poster below.
You can buy The Daughter of Doctor Moreau from your local bookshop, or online from Bookshop UK, Hive Books, Blackwell's, Foyle's, WH Smith, Waterstones or Amazon 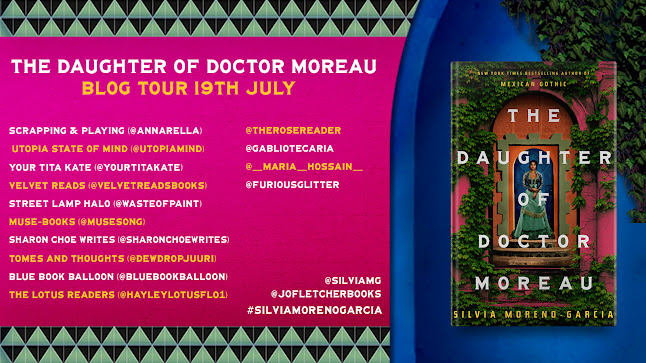