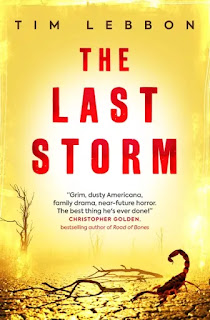 The Last Storm
Tim Lebbon
Titan Books, 5 July 2022
Available as: PB, 352pp, audio, e
Source: Advance copy
ISBN(PB): 9781803360423
I'm grateful to Titan Books for a free advance copy of The Last Storm to consider for review.
The Last Storm is a fine combination of the apocalyptic (not 'post', it's still proceeding), cosmic horror and survival. For me the impact was heightened by reading it as the UK cooked in record summer temperatures.
In a near future USA, climate change and global heating has devastated large parts of the interior, producing a desert that is not only waterless but lawless, inhabited by townspeople just clinging on, water pirates ('soakers'), religious fanatics, the ill, the old. There is civilisation clinging on here and there - this isn't a novel about what happens 'after', the crisis is still going on, still getting worse year on year. When it's not heat, it's torrential floods, or hurricanes which devastate the coasts.
The story is focussed one family, a family with rather special talents. Jessie and his daughter Ash are rainmakers, gifted with the ability to plug into an alternate reality and bring a downpour. Seemingly beneficent, it is though a skill or craft that seems to bring no good. Perhaps it once did, but as humanity has poisoned and burned the Earth, the rainmakers' power seems now to access a strange, blighted and dangerous realm with scorpions as likely to fall as water. Yet the skill is still whispered about, and there are those who seek out rainmakers, for a whole mixed bag of reasons.
Against this background, Ash has gone missing, off into the heat. Karina, her mother, spends years searching for her, while Jessie, believing her dead, retreats and broods in a remote compound, seeing almost nobody, accompanied only by his old dog, Rocky.
When the story really begins, Karina has picked up Ash's trail and returns to demand that Jessie come with her to follow it. Watching the corpse of their broken relationship between twitch and spasm - overseen only by a puzzled Rocky - was very moving, Lebbon's nuanced animation of it creating a true and convincing depiction of two people who had spent so much time together - with shared moments, shared joys and sorrows - and then so long apart.
And when you understand things from Ash's point of view, you'll see why they did that. Ash is also portrayed very effectively, a troubled young woman who has a storm raging in her very self, a storm that, when it catches her, leaves her absent, away and vulnerable. She has a sort of quest as she ranges across the desert, collecting odd scraps of this and that from which to build a new 'apparatus'. In chapters following Ash, Jessie, Karina and others I won't say much abut (spoilers!) we're gradually shown how mucked up this world is, and what dangerous people are in it - as well as that hope endures and love can flower even in the desert, given a little rain.
This is an entertaining and gripping read, with a variety of characters drawn in shades of grey, all flawed, twisted and in varying degrees, failing. There is one deeply unlikeable and unpleasant person here too, yet even they have convincing motivation rooted in loss and inadequacy.
I should also say there are some truly violent and bloody scenes here, especially those driven by one of the Soakers, a man bent on revenge (against who? and why?) and it soon becomes clear that on The Last Storm, we're totally beyond the reach of human justice and pretty much beyond and human support, though mutual obligations and decency do still exist.
The Last Storm is a maelstrom of guilt, love, hate, determination, new hopes and old fears.
And it HAS A DOG!
STRONGLY recommended.
For more information about The Last Storm, see the publisher's website here.