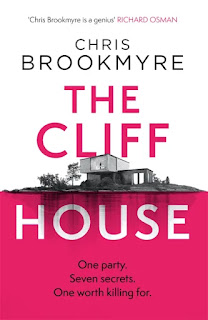 I'm grateful to the publisher for an advance e-copy of The Cliff House via Netgalley.

One thing I really love to see in a novel is a writer taking a well-known situation, turning it inside out, and making it fresh again.

Which is just what Brookmyre does in The Cliff House. Seven women, are stranded on a Scottish island, with no communications - and a killer at large. You can see where this is coming from, and a better take on the And Then There Were None setup I've yet to read - an especially difficult task for an author, I think, in our modern world of mobiles, wifi and messaging. But Brookmyre makes that into a plus: all those secrets that might be vulnerable online, all the possibilities for deception and social engineering...

Add to that the extent that seven are all interesting, well developed and distinct characters. Lauren, the wealthy property-developer and owner of the venue for entrepreneur Jen's luxurious hen-do. Michelle, pop diva and once bandmate of resentful Helena. Beattie, sister of Jen's missing-presumed-dead ex, Jason. (Awkward...) Samira, sister of Jen's soon-to-be husband, Zaki. Kennedy, Jen's tennis coach and general woman of mystery. And Nicolette, whose place here is unclear. Brookmyre sets up secrets, resentments, long-smouldering grudges and hatreds which are implied, but not explained, in the early chapters, then lets rip with a catastrophe and a sudden, unanticipated, life-or-death struggle.

It's soon clear that everybody here has something they want to keep hidden, and that for most of them, that's not just from fear of exposure and ridicule: the stakes are higher than that - life, liberty, wealth and status, and regard - all those are on the line (and other, subtler factors such as the tug of guilt and threats to a carefully built and tended self-image, or to a long nurtured and indulged grudge). Not everyone is trying to work an angle, we are told, but the evidence presented rather disproves that and indeed some seem to have so many angles that they could easily have stepped from a Lovecraftian story.

With so much going on, it would be easy for the reader to be confused. However, Brookmyre's brilliant characterisation means that is never an issue. Also he uses to a clever trick of pairing everyone off for most of the book, so that the focus is on interactions between three pairs of women, allowing for a progressively deeper and more complex exploration of their fears and histories - and for some dicey moments - before everyone is brought together again as truths, and accusations, emerge.

There's also a really wicked vein of humour and many pithy observations of life - part of the backstory includes abusive and manipulative partners, couples who've simply fallen out of love with each other, obsession, and opportunism. Plus an experience common to many of the women of absence - whether that be a partner, a parent, or a child, and of the attempts made to overcome that (or ignore it). It makes for a book that's emotionally complex as well as a devilish crime mystery, indeed, a book that sparkles on every page, seizing the reader and carrying them along through the process of revealing red herrings, forcing everyone to fess up (will they do it before The Reaper does it for them, or just does for them?) and - which is the part I enjoyed most - creating little realignments, moments of realisation that, just perhaps, those long-held grudges and hatred might shift.

With the emphasis on "might". Everyone here is under intense pressure, backs to the wall, with no help or support. Old fears and guilts become powerful, and maybe it's best just to shut up and keep your head down? Or come out fighting? Or is there a better way to try and survive? In the end, at the heart of this story, is a very moral, very human dimension. Yes, it may all be a game of Prisoner's Dilemma writ large, but the complexities of relations between the seven make it hard for anyone to settle on a winning strategy. And there isn't time to ponder things...

For more information about The Cliff House, see the publisher's website here.