#Review - The Draw of the Sea by Wyl Menmuir 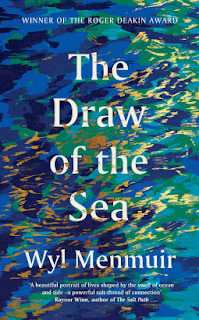 The Draw of the Sea
Wyl Menmuir
Quarto, 5 July 2022
Available as: HB, 304pp, e
Source: Advance e-copy
ISBN(HB): 9780711273962
I'm grateful to the publisher for an advance e-copy of The Draw of the Sea to consider for review.
They that go down to the sea in ships,
that do business in great waters;
These see the works of the Lord,
and his wonders in the deep.
(Psalm 107, 23-24)
When I was a child, the family would sometimes go to the seaside (New Brighton) on a winter's day and sit in the car watching the waves break on the beach. This sounds weird, but I gather it's actually quite a common thing to do.
Menmuir's book - part memoir, part travelogue, all salty and haunting - explores that same instinct, although it celebrates rather closer engagement with the water than I've ever had - which is one of the things that makes The Draw of the Sea such an enthralling read.
Here you'll meet beachcombers ('wreckers'), surfers, sailors, fishermen, conservationists, artists and everyone in between. Based in Cornwall, Menmuir has many opportunities to explore the seashore and he weaves the results together into a bewitching, hypnotic and all-absorbing hymn to the waves, the shifting pebbles, the animals and plants that make their homes in the water. It also celebrates the people who go down to the sea and do business in great - or even small - waters.
It isn't a romanticised or idyllic account. Menmuir makes clear the challenges of the life: for example, physical dangers and hardships (in past times, those wreckers depended on what they could scrounge from the shore - and no, they didn't lure ships onto the rocks). He also draws attention to the damage being done to wildlife and ecosystems by modernity in general or, sometimes, simply by foolish individuals; to the unimaginable quantities of plastics polluting the seas, the oil spills, overfishing and sheer thoughtlessness of humanity. It's grim reading in places, but we do also meet people who are trying to make a difference - and the author admits that there can be a sort of syncronicitous beauty in the bizarre findings from beaches, even in all that plastic.
The chapters are short, focussing on the different ways the sea can be approached, understood or enjoyed and woven into it are Menmuir's own memories, beginning with a life far from the shore and then describing all the facets of his relationship with it now - including resorting there for healing and calm, surely one of the most common reasons for walking the beach or living near the sea. Even that, though, has its drawbacks. We are shown the effect on coastal communities of second-home ownership and overtourism, the impact on humans of other humans being strangely similar to that of humans on the wildlife.
In exploring what the sea means to us, and allowing us to hear from those who who work with it, live by it, enjoy it, struggle with it or seek to preserve it, Menmuir presents a wonderful variety of voices and of experiences. There is a great deal of wisdom here, and I loved the way that he lets these different viewpoints speak to one another, sometimes in harmony, sometimes not. The book benefits from the fact that Menmuir is part of the communities described here - this isn't a journalists's fleeting account, it's grounded (maybe I should say watered?) in his lived experience and drips with a gentle authenticity that makes it a joy to read.
The photographs and maps add to that, ranging from the intimate - beach gleanings or individuals - to the epic - seascapes and wild views. In fact the book itself is a gorgeous item, the cover a treat to the eye, the endpapers marbled, the photos atmospheric and numinous.  Definitely one to hold in one's hands and read, I think - though if you're actually going to take the book onto those Cornish beaches you might want the e-book too.
For more information about The Draw of the Sea, see the publisher's website here.
Email ThisBlogThis!Share to TwitterShare to FacebookShare to Pinterest
Labels: 2022, Cornwall, memoir, non fiction, the sea