#Review - The Daves Next Door by Will Carver 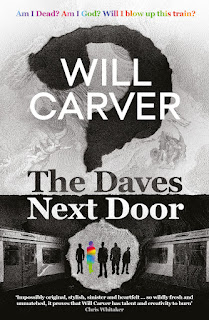 I'm grateful to Orenda for an advance copy of The Daves Next Door to consider for review.

I did wonder if I should take the title of The Daves Next Door as being a bit close to home - though I'm a David, not a Dave, he doesn't (I think) live next door, and on a close reading I don't seem too be in here, I've learned never to trust Mr Carver's narratives to be what they seem...

Regardless, a return to the Carververse is always overdue, and in The Daves Next Door, we see the same moral noir as in Carver's previous writing (including a few clues to show that yes, this is the same world as that of Nothing Important Happened Today and Psychopaths Anonymous). Reading these books is like being a fly that's incautiously settled into a patch of honey: they pull you in, they'll be the end of you, but oh how sweet the process is.

The Daves Next Door is perhaps a more fractured story that its predecessors, following a number of different characters who are less obviously linked by a location or involvement in ongoing events. Those Daves, sharing a flat and a disease in mutual loathing, a much overworked and put-upon hospital nurse with an adequate boyfriend, an elderly man who thinks he's died and gone to Purgatory, two grifters, a a sportsman brought down by a seemingly random injury, and others - including a suicide bomber, perhaps.

They are though linked, and in two ways.

First, Carver's concern for human motivation, consequences and character comes through as strongly as ever. For example, there's a man here who was devoted to his wife, and bereft since her death. His son, rather than seeing that devotion as the wonderful loving thing it was, is rather resentful, so he's drifted away and won't be there for his dad's torment, which we see depicted here. A little vignette about human nature and a dynamic that's central to one of the plot strands here but also tells us something dark about people, something echoed across all the other mini-stories.

Secondly, one figure - that maybe-bomber - holds the story together, functioning (perhaps) as an all-seeing narrator, recounting the lives of the other characters, so therefore (possibly) a God-like figure or equally (maybe) an Author. Their chapters are composed as questions - such a barrage of questions, from the profound to the trivial, pausing at all stops in between, but especially circling mysteries to which humanity has signally failed to discover answers. The Four Last Things - Heaven, Hell, Death and Judgement - loom over this story, especially, perhaps, Judgement which is passed not only on the characters and the world they inhabit (the world WE inhabit) but also, this being the Carververse, on the reader as well. No other author I know has quite the ability of Carver to involve his readers in the awkward moral failings that he highlights is his stories, though he does it in an utterly disarming, even charming, way. (That's the honey).

He does it, especially, by refusing to let the reader stick the blame on one character or another, even one who has behaved abominably (as many do). There are no neat endings, no convenient resolutions and retribution - people you'd grown fond of have terrible things happen to them, the unpleasant can simply stroll away.

Maybe that's not quite right though. As we would expect, one person who's given an especially hard time here is God, and of course, as They may feature in the story, many of the questions a certain character poses might actually be asked of Themself. (I apologise for the clunky language but given Carver's multi-layered portrayals here, words become rather slippery). This makes for a rather convincing self-prosecution which is genuinely unsettling both in terms of what it implies for the story and as an accusation against religion and those who follow it.

(I have to say that for me, the omnipotent, all-seeing, create-everything-in-seven-days version of God who's in point here is perhaps something of a straw deity. Alternatives are available, and less absurd. But maybe that is slightly mean-minded of me - after all there are plenty of people who hold to this picture).

In short, I'd come to expect from this author, The Daves Next Door is a vivid and thoughtful, and often  angry, book that tells a compelling and absorbing story (across its many threads) but comes with a real moral punch, real engagement with ideas, and shines with compassion even at its darkest moments (of which there are quite few).

I'd strongly recommend, whether or not you're read any of Mr Carver's previous books: this is essentially a standalone though with some clear links, thematically and in plot terms, to them.

For more information about this book, see the Orenda website here.