#Review - What Doesn't Break Us by Helen Sedgwick 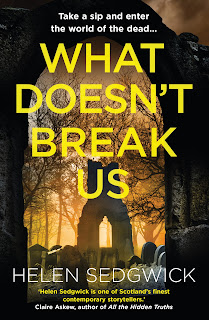 It's great to return to Burrowhead for this third and final instalment of Sedgwick's folk-horror crime trilogy, set in "the villages" somewhere on the coast. "The City" is nearby, appearing in a couple of scenes, but with the exact location vague. Are we on the East or the West coast? In England or Scotland? (The audio may give some clues but I'm saying nothing...)

I say "great" but as readers of the previous books will know, Burrowhead is a place of unease and this book does go to some very dark places. This book addresses mystery, shadow, desperate history and half-remembered violence. DI Georgie Strachan, an outsider to Burrowhead - she's from the US and she's Black - sees this clearly. In What Doesn't Break Us, Georgie is at her limits.

Her marriage with Fergus has apparently failed after he has been sucked into a kind of atavistic, nativist celebration of the town's mysterious and blood soaked roots.

Her police station is about to be shut.

And the crimes she's been investigating - missing Abigail from all those years ago, the drugs on sale in the village, a pair of recent suicides - seem no closer to resolution.

Even Georgie's friend and colleague Trish has handed in her notice, drawn further into the orbit of the villagers and their Community Council, blaming Georgie for the death of her granddad and engaged in her own mysterious schemes.

And it just keeps raining!

I loved this book. It's rooted in little, intimate scenes involving the villagers - older members of the community, kids, the police, Georgie, Fergus. There are flashbacks, teasing us with history over a vast period of time. Back to the prehistory which so many here seem to dream of. Back a year or two to that suicide (if it was). Back to the 60s when Abigail disappeared. Sedgwick manages, at the same time, to convey a multiplicity of viewpoints, of motives, of plans and plots and at the same time, that dogged, bland, impervious Burrowhead stance, that gentle smile in the face of officialdom, which is frustrating Georgie's enquiries and the understanding of any outsider. We are both invited in, to observe all the doings of this community, and shut out, uncomprehending as to what is happening, dismayed as it finds new victims, new cruelties.

Or old victims, old cruelties - because this book is simultanwously taking place now, and then.

Also teasing is that hint of the supernatural, that sense of haunting. Despite what some think they witness here, we're not in full-blown Wicker Man territory, there is no glimpse of an organised cult, rather, baffled, confused, and half-lost suggestions of 21st century people trying to lay claim on a tradition that may or may not ever have existed. A knife presumed ancient, for example, turns out to have a more complex history. Events here are less about ancient survivals as contestation over the meaning of the past.

In that, of course, Burrowhead is all of a piece with a country whose wider history, culture and perception of its past is as reinvented and reworked as a continually ploughed field. Objects, events and persons here are identified in relation to a shifting background and the identity of who gets to lead that process, and why they are able to, is almost more important and interesting than any "reality" that lies behind it all. The village museum enshrines a very particular view of Burrowhead history, a view that very firmly leaves things out, as Fergus comes to realise by the end of the story.

As well as being an intricate and satisfying crime novel in itself, What Doesn't Break Us and the Burrowhead trilogy as a whole hold up a mirror to modern Britain, but a warped, blotched and distempered mirror, one that's therefore perfectly suited to showing us our own self-created identity, highlighting not only the parts of the story we choose to tell but those we'd rather leave out. In the book, it's essential to understand and take ownership of these processes - because the past can influence the future, but he who owns the present, owns the past, as Orwell saw. Sedgwick therefore poses urgent questions to British, particularly to English, society as a whole.

This whole trilogy is a glorious achievement and I'd urge anyone who hasn't to read it NOW.

Here are my reviews of the first book, When the Dead Come Calling, and of the second, Where the Missing Gather.

For more information about What Doesn't Break Us, see the publisher's website here.