#Review - The Book of Gothel by Mary McMyne 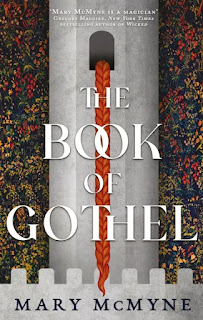 The Book of Gothel
Mary McMyne
Orbit, 28 July 2022
Available as: PB,  366pp, e, audio
Source: Advance copy
ISBN(PB): 9780356517704
I'm grateful to Orbit for an advance copy of The Book of Gothel to consider for review.
The Book of Gothel is a compelling, richly imagined and involving fairy-story retelling. It distinguishes itself from much of this genre by not being set in a vaguely fantastical world but by being firmly rooted in a particular time and place - the Black Forest of the later 12th century. Indeed, the book shows a clear engagement with the political and religious conditions of the time. There is a framing device (the discovery and translation of the book itself by a modern academic) which makes this completely clear, neatly answering the "how do I come to be reading this story?" question.
Our main protagonist is Haelewise, introduced as a young girl at the beginning of the story but who is writing it all down as an old woman. It is her life story, or at least the story of her early life, before she became "Mother Gothel", named from the tower in which she lives. The Book of Gothel is a wonderfully varied story, involving magic, romance, politics, religion and prejudice as well as male power. Haelewise wants nothing more than to be safe with her family, but the times - and her weak father - won't permit this fate for her. After her mother dies, Haelewise - subject from birth to "spells" - either migraines or epilepsy, perhaps - is distrusted by the townsfolk and driven out as being a witch. After that, her existence is precarious, not really fitting in anywhere and full of yearning, for the mother and the life she has lost, and for the sweetheart who might have been hers had things been different.
Haelewise's life is also shaped by her having to compromise to receive any help or support. What she's is being asked to sacrifice is her adherence to the creed of her mother - a system of belief, part magical craft, part old religion, part simply inherited wisdom that challenges the Church - which Haelewise was only just discovering. McMyne makes this very much something that Haelewise sees as her inheritance from her adored mother, so more than simply a creed or faith, it's bound up with her identity and with the love of a parent. A very personal thing, I think. That connection gives Haelewise's dilemma a real depth and heart, one that keeps this book from being at centre a neo-pagan apologia.
That complexity of holding together different beliefs and faith systems also shows in what to me was the most intriguing aspect of the story - an encounter between Haelewise and St Hildegard of Bingen, well known now for her mystical experiences but also for her music (and much else!) I loved that McMyne let Hildegard show the possibility of a Christian mystical context, and suggest that these matters might be a little bit complex. Like Haelewise, Hildegard is clearly having to compromise and her success both in politics and in church affairs perhaps suggests this may not be a losing game.
Haelewise can be an annoying character at times, ignoring what seems like good advice not only form Hildegard but also from aged witch Kunegunde and indeed at times from her mother too. (If somebody tells you not to venture outside the charmed circle of stones because it it VERY DANGEROUS and then you do, what do you expect to happen?) However throughout her adventures, she is an active, bold and determined young woman. Her understanding of the situation shifts and her goals alter accordingly. perhaps becoming more attainable, but she never gives up on her determination to be safe with a family - and she is a formidable enemy to those who would stand in her way.
There are only a couple of aspects where I wanted a little more.
The first is the insistence in the publicity - and this is reflected in the cover image - that this is the story behind the witch in Rapunzel (the woman who shuts Rapunzel in the tower). While that may well be true, the main events of Rapunzel take place later than the period covered by this book. They are certainly mentioned but are not at all central to The Book of Gothel. (I would love to see McMyne write that story, but it would definitely be a Part II of Haelewise's story). The other is that I hoped that a little more of Prof. Eisenberg's discovery, which bookends the story. I anticipated that things might jump off from what she learns, with consequences in the modern world. But perhaps that, too, may be written one day?
Those reservations are perhaps a bit unfair ("this book doesn't contain what it doesn't contain!") because the story that IS here is a taut and well-written fantasy novel with some real moral and theological weight. It isn't, in the end, a retelling of a particular fairytale - though you may spot echoes of one or two apart from Rapunzel - but actually I think that's a good thing. The Book of Gothel is its own story, at the same time perfectly comfortable being both set in a recognisable part of the medieval period and on the borders of fantasy, and it is a cracking story at that.
For more information about The Book of Gothel, see the publisher's website here.