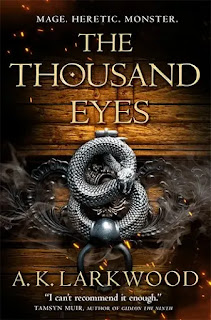 I'm grateful to the publisher for an advance copy of The Thousand Eyes to consider for review.

With Sethennai out of the picture, a girl's still got to make a giving and at the start of the book we see Csorwe, Shuthmili and Tal engaging in a spot of Indiana Jones style temple robbery in a cursed world reached through the Maze.

The only problem is, in this universes, "abandoned" temples can harbour more than spiders, snakes and traps. This a world where the gods are real, and terrible. And they may inhabit you (as we see from the inner dialogue Shuthmili has with the entity she addresses as her "corruptor"). I loved the contrast in this opening part of the book between the banal everyday chatter of the three fortune-hunters and the weird, creepy, and frankly terrifying world that are navigating. Fantasy doesn't have to be high, sonorous and dusty - Larkwood expertly spins a tale that just feels real because of the triviality that offsets all the shadows and terror.

So far, The Thousand Eyes may sound similar to The Unspoken Name. Which would be absolutely fine by me - it's a great read. But Larkwood delivers still more. A third of the way through the book, a Thing happens which completely overturns the narrative, upping the stakes considerably and placing our friends into a very different situation. It's frustrating, but I don't want to say exactly what, as it would spoil the story.

I will say though that how things turn out will depend on the very particular strengths and weaknesses of the different characters, especially Tal and Csorwe, and on the tensions and stresses in those apparently mundane relationships that we saw earlier. It's a story of love and loss and devotion and one of waiting and hoping - but also of how those things, pushed without limit, can sour into hatred and pride. A certain goddess here has had enough of the waiting and hoping and decides to take action - but with terrible consequences. A certain mage bears her loss and remains devoted to her lover, but finds she must commit terrible crimes to achieve her ends. A certain rogue... oh, well, it's Tal... has a lot of time to ponder his life choices and to regret those moments when he played the hero. (Tal, especially, is amazingly depicted here - his emotional quirks, his stormy relationship with his family, his love-hate relationship with Sethennai, a bewitching villain if ever there was one).

It's a page-turning, life-filling monster of a book which, once begun, you simply HAVE to finish. And that finish is cruel and filled with loss: but as we know, 'What is saved is saved only for a moment. All voices sound in silence, but before the echoes die away, their sound is sweet'.

I think it will be a long time before the echoes of The Unspoken Name and The Thousand Eyes die away. And they are, indeed, very sweet.