#Review - The This by Adam Roberts 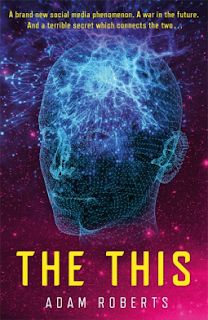 I'm grateful to the publisher for an advance e-copy of The This via NetGalley to consider for review.

'In the Bardo, subject and object are the same.'

As always with Adam Roberts' books, The This fizzes with ideas, the story illustrating, looping around, and developing, themes from philosophy, physics, popular culture, literature, religion, music (and doubtless more I didn't spot. Roberts is, in the best sense of the word, a clever author - not because, or not only because, of this incredible hinterland, but because he is able to share it without making the reader feel they've missed stuff. Rather, one feels gleeful about what one has spotted.

It helps that while the background (as I learned from the Afterword) may be in Hegel, the actual argument and case developed in the book is very plain to see whether or not you have read that philosopher. The points we see made are about a person versus a collective society, about loneliness ('the odd thing about loneliness is the way it's both an intensely isolating , individual experience and the one thing most widely shared by human beings'), about the experience of loss, about that weird thing we call death. They are all integrated into a portrayal of modern life that feels right (right as in, convincing, real, authentic).

Rich lives that modern life. He's possibly one of the many lives (an entire page of them farmers! But also I think I saw Billy Bragg lyrics?) lived by the "you" that comes and goes from the Bardo in the bewitching opening section of the book. This section allows Roberts free rein devising inventive micro-stories (whole lives told in a sentence or a paragraph, many bringing in those references I mentioned above). Rich is, at least in this life, not really rich - that's more of a nickname - but he is comfortable enough, in his Putney flat, to survive on occasional bits of work from the gig economy. Sometimes he even has a bit of cash left over to pursue his hobby of collecting... cash, in the form of rare banknotes. (We get a couple of pages of digression musing on the nature of banknotes as essentially known lies).

Interspersed with Rich's story, Roberts has included chunks of social media, sort of. Status updates. Locations. Spam. Messages. Complaints. Puns (of course puns! 'He preferred Apple products to PCs, computer-wise. You might say: pomme? - cuter. You might say.' Roberts' way with puns is genius. They aren't just there to be funny, rather they're a tool that adds layers of meaning to the text). The way this material is arranged means that the flow of Rich's story is continually broken up. I had to keep going back and reminding myself where a sentence came from, before my attention was spammed, the whole experience of course redolent of the contemporary struggle for attention in the face of a torrent of jangling content - but also illustrating Rich's particular life as he twiddles and fiddles his days away supposedly working on his novel (an epic fantasy project).

The story takes wing when Rich is allotted a job interviewing the representative of a company, the 'The This' of the title, which has developed an implant allowing social media to be literally pumped into the brain. Is The This a cult, as some allege? Rich is intrigued by his encounter, but soon discovers that The This may have plans for him. As the behaviour of the company becomes outright stalkery, it seems clear that Rich is somehow important - and not only to The This.

Several centuries on, Adan lives an, I suppose, even more modern life (it's the future so it must be more modern?) focussed on Elegy, an AI sex-toy that Adan is absurdly, sweetly, devoted to. But it's still a slacker existence similar to Rich's, buffered by his mother's money - until she defects to The Enemy. By Adan's time The This has metastasised into a formidable hive mind against which humanity - or parts of it - are at war. And Adan soon finds himself in the army.

There are other strands too - a whole section set in the world of Nineteen Eighty-Four, expanding on the theme of the hive mind in an interpretation of that book that I'd never have considered but which fitted exactly with the idea of Big Brother. Some writers would take just that idea and make it into a whole story - by no means the only example in this book of Roberts' prodigality with ideas: basically he hoses the reader with them. Loneliness? Here is Father Mackenzie, caught as it were just out of the song, 'wiping his hands on his cassock and talking nervously about God's love'. Ah, we're doing Beatles, well, here is 'a car alarm... going off like Yoko Ono in full song'. The book is like a bulging sack of presents on Christmas Day, with treat after treat to unwrap.

Returning to Adan's story, though, Roberts uses it to add yet another thematic thread with a confused, panicked view of warfare - all fumbles and shock and confusion with comrades butchered and intentions muddled). It's a war in which Adan, inexplicably, seems to play a central role but his place - and importance - are no clearer than Rich's. I'd say the focus of the story switches from one to the other, Roberts giving us clear portrayals of both. Not necessarily people I'd want to meet or spend time with, they are both, nevertheless, rounded, actual characters, something that gives them a sort of edge over the various forces - the military, espionage agencies or The This itself - that are trying to manipulate them. The book returns in the end, I think, to deep questions: what it is that makes us human, whether mere happiness and contentment is enough to satisfy that nature, and what may lie beyond even something like The This which seems - in many respects - like a desirable endpoint for human evolution.

Clever, humane, absorbing and great fun, this is in my view Roberts' writing at his very very best. Just a glorious book to read. Get it now!