#Review - The God of Lost Words by AJ Hackwith 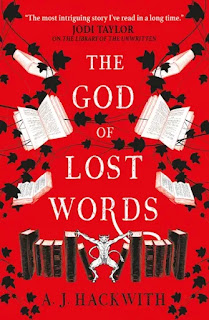 I'm grateful to the publisher for an advance copy of The God of Lost Words to consider for review.
'Every soul a story, and every moment fresh ink on the page'.
It's great to meet again Claire Juniper Hadley, for whom 'all pockets were best judged by book size...'
Following from The Library of the Unwritten and The Archive of the Forgotten, The God of Lost Words returns to Hell's Library. Claire,  ex-Librarian of the Unwritten Wing, has moved on to preside over the Arcane Wing. It contains dangerous artefacts - powerful stuff best kept out of circulation and, as we saw in earlier books, a honeypot for power-seeking demons. Not really a job for a Librarian, you might think, but then Claire has been on a journey in these books, discovering some things about herself that she really didn't want to know, and in the course of this her Library rejected her, so she must do what she can.
If truth be known, she isn't actually doing the job very well. Early in this book Malphas, General of Hell, arrives to make a surprise inspection. She's caught a whiff of secrets, and secrets, in Hell, are power. In The Archive of the Forgotten we learned that books have souls, or rather, books are souls (every reader knew this already, of course). And souls are sought-after currency. Malphas's visit soon develops into a threat to the Library's very existence - not just the Unwritten and the Arcane Wings, the branches hosted by Hell, but those in other realms too.
In The God of Lost Words, the stakes seem higher, the threats greater, the relationships more important, than before. Indeed, much of the action isn't action as such but is about the understanding between the central characters: muse Brevity, now Librarian of the Unwritten (of course Brevity is missing from the Muses Corps - nobody surveying modern culture could doubt that) and the strange triangle of Claire, Hero, who escaped from a now-destroyed book, and fallen angel Ramiel. I have to say, I was entranced by the delicate and evolving way that Hackwith depicts the complicated love between these three characters. The result is something outstanding among books I've recently read: not easy, not smooth, but electrified, writhing, unstable - at the same time as it is deep and affecting. Other familiar characters reappear such as Walter, an instance of the God of Death, and Bjorn, Librarian of Untold Stories, a branch of the Library based in Valhalla.
One of the challenges Claire faces here is seeking to outwit the legions of Hell itself. Hackwith's world is one from which the gods are mysteriously absent - despite their Realms being depicted - so she's not up against Lucifer as such, but Malphas is an able opponent, clever, ruthless and backed by immeasurable forces. Rami's sword, Hero's rapier and Claire's teapot are not going to prevail against that. Rather, she needs to find strength in the stories she has inherited from previous generations of Librarians - and to build alliances, so her other challenge is convincing her fellow Librarians that the threat to them all is real and they they should, against all precedent, stand together.
In many respects this book is more focussed and direct than the previous ones. It's about sacrifice, courage and endurance, with less general dashing around, and one senses that salvation, if it can be found, will be close to home - there is an early foray to the maze of the crocodile god, seen in The Library of the Unwritten, but that doesn't end well, as if confirming that Claire & Co need to look within.
The book displays, I think, how all the characters here have grown up - not only Claire, who was in some respects rather unpleasant to begin with (well, she had been exiled to Hell) but also Hero - he now has love in his life - and Rami who, you may recall, began this series as essentially a sword for hire, doing Heaven's dirty work for it. It also shows how Hackwith has kept this series on track. A fantasy novel about libraries and books could easily teeter from the meta to the twee, but like its predecessors, The God of Lost Words resists that. Rather, it has truth and love at its heart. And anger: whether at Hell taking its cue from human wickedness (chilly cages with children in - 'a room where innocence went to rot') or indeed Heaven meddling where it's not wanted ('What paradise realm has never met a soul it didn't want to save?')
Yes, there are in-jokes, but they are kept under control and what predominates is a thrilling story, complex, engaging characters and the ring of truth. And some scorching writing (if you'll pardon the expression) - from 'if we wait for a landlord who will not eat us for his own benefit we'll be realmless forever' to 'perhaps "amp up the imperialist voice" is not the way to go, given... British history...' to the tearjerking 'that appeared to be Hero and Claire's language of love, reminding each other not to be monsters' to... well, so many more bits that I could quote, but I'd better stop. (I'll just say, though, that when, in pursuit of Claire's schemes, the Librarians assemble, you may find a particular one rather familiar...)
Rather a brilliant and fitting end to this trilogy, I think.
For more information about The God of Lost Words, see the Titan Books website here.
Email ThisBlogThis!Share to TwitterShare to FacebookShare to Pinterest
Labels: 2022, AJ Hackwith, Fantasy, Hell's Library