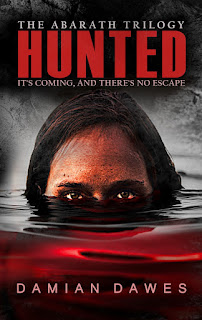 Hunted (Abarath Trilogy, Book 1)
Damian Dawes
Dark Night Horror, 25 January 2022
Available as: PB, 321pp, e
Source: Advance copy
ISBN(PB): 9781739990879
I'm grateful to the publisher and to Anne Cater for a free advance e-copy of Hunted to consider for review, and for inviting me to take part in the blogtour.
Taking us back to the dying days of the Cold War in 1983, Hunted features an apparently unlikely collaboration: the Vladyka Mira, an ex-Soviet icebreaker, is now owned by maverick Russian captain Belov and (under) crewed by a collection of misfits from both sides of the Iron Curtain. Ostensibly engaged on a scientific mission, Belov's happy to take tourists too, on the sly.
The focus of the book is on Kat Robbins, a diver enlisted for the research work but who has some secrets of her own. Perhaps they might explain why she's buried herself away at the end of the earth, abandoned her boyfriend and gets by on drugs? But perhaps they are a luxury that will cost her, fatally distracting Kat from whatever it is that's out there. On the ice. In the cold.
I really enjoyed this story which is pitched somewhere between the supernatural - the creature we encounter has apparently inspired dark legends among the Indigenous peoples of the Arctic, but is all to physical in its actions - and a thriller: the focus on dive hardware, the deficiencies of the ship and that lurking East-West split put me in mind of full-throated adventure novels where survival is all about reading the environment, thinking quickly and understanding risk.
Speaking of which - Captain Belov seems to have lost his ability to cope with risk. Seemingly a bit of a cliché at the start (a drunken Russian sailor) Dawes rather cleverly turns him inside out, letting us see where he's from and how he got there, rather than just letting him stay a swaying, inebriated stereotype. He does the same with all the characters here: the awful businessman who's booked passage aboard and his rather crushed wife, the couple of sad academics, Dave - Kat's fellow diver - and perhaps most of all, the ship's engineer, a truly awful character, a stalker and abuser who, nevertheless, Kat is forced to rely on in one particularly claustrophobic episode.
Hunted is full of that kind of dark menace: threats from the unknown horror outside but also from the monsters aboard the ship who - frankly - can be just as dangerous and difficult to defend from. There is a lot said here about how the "monster" out there is purse evil.  I have to say I had my doubts - isn't it an animal doing what animals do? (Though, as this is just volume 1, there are also hints of more - so perhaps it'll turn not to be). On the other hand we do see some truly evil human behaviour, with the plight of a starving Polar bear and her cub pointing up the wider impact of climate change.
Overall this makes it an atmospheric and scary piece of writing. There's much to discover in this book.
For more information, see the author's website here - and check out the other stops on the tour, listed on the poster below.
You can buy Hunted from Amazon here.