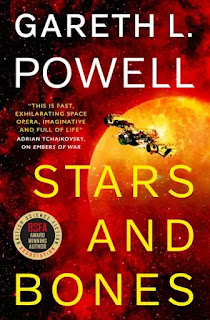 I'm grateful to Titan Books for a free advance copy of Stars and Bones to consider for review.

The first in a new series from Gareth Powell, Stars and Bones is an ambitious, not to say audacious, space opera that imagines a very different near-future for humanity from that depressing one we may expect - though it is not a future on Earth.

No, rather, within a handful of generations, Powell sees us cast out of our soiled Eden to become nomads, ever sailing the currents of space in a fleet of arks, searching for a place where we are allowed to drop anchor.

With overtones of "2001" and a distinct sense of judgement, Stars and Bones follows a split timeline, showing us how this came to be through the perspectives of the world's richest man, Haruki, and a couple of scientists, Frank and Victoria, who all witnessed the start of the exile. Seventy-five years into the future, it follows Eryn, Navigator of survey ship Curious Ocelot, which, in the best Star Trek tradition, is about to discover something nasty, very nasty indeed, on a planet known as Candidate-623.

I loved the relationship between Eryn and the sentient Ocelot (represented in physical form by its avatar, a blue-skinned person). There's a level of familiarity and banter between them which hints at how close and trusting they are: bonded for life and with fates linked (elsewhere we see the horror when that bond is broken). I also liked Eryn full stop: her impulsiveness, her looking out for sulky teenage niece Madison. Most of all, the guilt-ridden relationship with sister Shay, Madison's mum, who's missing now creates some complex dynamics between the three and undercurrents which challenge Eryn in discharging her varied duties. There are moments when I just wanted to shout "do the thing!" to Eryn while understanding her hesitation or how she was torn. Life in space circa 2100CE is riddled with dilemmas, perhaps explaining if not always excusing Eryn's general affect of searching for somebody to thump.

There are to be fair plenty of candidates for that honour, from the leader of a survey team who seems determined to court as much danger as possible, to the deadly alien shape-shifters who plague Eryn throughout the book, to the... But that would be to spoil the story. Let's just say there is one entity here, of vast power and ancient origin, that is particularly aloof. And annoying.

It's an action-packed, combat-rich novel, part escape, part race to uncover a mystery dating back to the early days of the exile, and the survival of the drifting human race is (of course) in peril. We see how in the vast fleet, humans have recreated - but also reworked - the divisions imported from Earth, with vastly different takes on abundance. We see how many, life-limiting cultural mores have been overcome - but not everywhere.

We also occupy one of my favourite situations in SF - the close-knit crew sharing space on a small, slightly rackety spacecraft through a combination of uneventful flight and unimaginable danger and the familiar locations - mess room, cramped quarters, hold and flight deck (seriously, if I could I'd build one of those just to live in). Familiar, maybe, but perfectly realised and deeply atmospheric.

Oh yes. Did I mention that we also meet a talking cat? Sam is fitted with an implant and able to vocalise, but he's still all cat, strolling in amidst a crisis to ask when he'll be fed. There's much more as well - a pair of detectives, the universe's most annoying influencer ever, and a fantastic, awe-inspiring location which our heroes must visit to find a recluse who may, just, have the answer that will save humanity.

Exciting, entertaining, scary at times and refreshingly different, I enjoyed Stars and Bones immensely and would strongly recommend it.

For more information about Stars and Bones, see the Titan books website here.