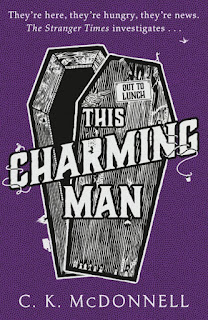 I'm grateful to the publisher for an advance e-copy of This Charming Man to consider for review.

This Charming Man follows on a few weeks after the events of The Stranger Times. Hannah has taken some time off to sort out her divorce problem (or rather, her husband problem). Meanwhile, as the prologue reveals, Manchester seems to be developing problems of its own. Vampires don't exist - as both mundane science and the knowing supernatural Folk attest - but what do you call it when a person develops strange dental features, is burned by sunlight, and craves human blood?

We're back with the misfits who edit The Stranger Times, an organ devoted to the bizarre and the unlikely and which is published from a deconsecrated church under the editorship of Vincent Banecroft, possibly the foulest man in journalism (I know). Hannah is the Assistant Editor, flung into the weird world of the Folk and their oppressors, the Founders and still getting to grips with a whole new world, as is DI Tom Sturgess, formerly the darling of the Greater Manchester Police but now tarnished by the events of the previous book.

The Stranger Times (the book, not the publication) was an enjoyable, though in places flawed, romp through a rather alternative take on urban fantasy. One of its problems for me was the extent to which the sheer outrageousness of Banecroft's character dominated things, with the rest of the team, and especially Hannah, rather flat in comparison (despite Banecroft being hospitalised and therefore absent for a chunk of the story). This Charming Man managed, in my view, a much better balance in this respect. Oddly, it does that partly by giving Banecroft more attention not less, showing his perspective on events, in particular how he is grieving for his wife and why he has land up at The Stranger Times. But it also brings in in another monster of a journalist, Stanley Roper, a freelancer who Bancroft brings in for his undoubted skills to form the "special investigations team" and sets on the track of villains who wish one member of the paper's staff no good at all.

The result is that there are two very strong storylines here with Banecroft playing a largely supportive part in driving them forwards (rather than just being annoying for unknown reasons. Though he still is annoying, of course). That gives more time for the team to bond and for their own different characters to come out, while also revealing a lot more about the supernatural side of Manchester. The denouement to all this was also satisfyingly violent and revelatory, demonstrating that, no, vampires aren't real - but also that power over reality can arise in the most unexpected places.

Overall I enjoyed this book, though a couple of things did strike me. First, as we learned in the previous book that the paper has powerful and wealthy backers, there was less of a sense of jeopardy over the need to get an issue together and keep the show on the road, with the focus on investigation rather than stories. (We do get snippets of typical stories though). And secondly, I'm still unclear which man in all this was charming! Most of them (a couple of the team members aside) seemed thoroughly unpleasant. Indeed, a major subplot is misogyny - which while it does eventually tend to bring those displaying it to a bad end (good) cannot be said to leave much scope for charm.

I'm inclined to view the title as ironic.

For more information about The Stranger Times see the publisher's website here.