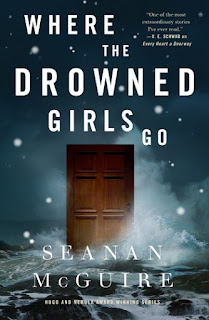 *US date, from Tor website. I think e and audio dates are the same for UK - and indeed I was able to obtain the audio - but based on information from my friendly local bookshop, I don't think the HB is available in UK until February. While I enjoyed listening to the book, this is a series I HAVE to have on my shelves so my preorder for the hardback is in!

Where the Drowned Girls Go picks up Cora's story. We have met Cora before in the Wayward Children series but she hasn't had her own book yet. Cora, bullied for being "fat", found liberation when she was thought to have drowned, but instead lived as a mermaid in The Trenches. We're only told little bits of her life in the Trenches, but it was clearly a full life, a good life, a brave life. On her return, she joined Miss Eleanor West's Home for Wayward Children from which she went on quest with some classmates to rescue Sumi.

That involved a trip to The Moors, where Cora came to the attention of the Drowned Gods - which still watch her and haunt her dreams. Desperate to escape their attention, Cora seeks out a different institution, one that will take the magic out of her. The Whitethorn Institute operates on different lines from the Home for Wayward Children. Designed to fit its students for this world - the only one that matters - it is, as Cora soon realises, a crueller place, but - she still tells herself - a necessary one, for her.

Here come all the misfits, the odd children, those who are something the world won't accept. Here they will be compelled, compresses, converted, so that they can take their place again as ordinary, unexceptional, compliant humans.

This is a rather different book from the earlier parts of the series. It's both more capital-R Realistic, and darker. It's also, on the face of things, much less magical. The key action here (indeed, nearly all of the action) takes place in our world, and the central events follow Cora at her new school and in particular her relationship with her new fellow pupils and teachers (mostly women referred to as "matrons" and though there is also a distinctly unpleasant and creepy Headmaster).

That action is less about falling into a magical world and trying to survive, or to get back to this one, or to find that true home again after losing it, that about the dilemma of fitting in in a truly hostile environment. It's therefore in many ways the antithesis of the series to date, the tension sustained by Cora's growing understanding of her situation and her continual debate with herself: is all this justified, worthwhile, helpful to her in getting rid of those stalky Drowned Gods?

McGuire avoids being didactic about this. This world, our "real" world, in a place of messy compromised and of getting by. None of us can know what it means to Coral to be surveilled by her Drowned Gods, who visit her in her dreams and make her afraid to sleep. None of us can know whether or not escaping them may be worth being untrue to to herself - what even is "herself"? Yet at the same time the whole setup of the Whitethorn is deeply troubling, clearly very prone to being read as a metaphor for, at best, a misconceived system designed to keep its victims in various closets, at worst, as one for various forms of conversion "therapy" with all the accompany damage that implies.

There are other elements of darkness here, too, but I'll say no more about them.

So the horror and jeopardy in this book is less fantastical and more mundane, and therefore, more intense and troubling that some high adventure in the land of Confection or lonely trip to the Moors. There is a distinct sense that the party's over and the bills about to be paid: being away form Eleanor West's School, which at least attempts to provide some mitigation and understanding, shows how threatening the world really is for these young people who know they don't belong.

This change in tone is probably an inevitable evolution of the series. It's one which means some readers may find Where the Drowned Girls Go rather a different book from the previous ones, but it opens the stories, I think, to showing new occasions for resistance, for solidarity and for courage, which these stories have always been about. It creates a richer, more complex canvas, perhaps, and I'll be interested to see what McGuire creates next on that canvas.

For more information about Where the Drowned Girls Go, see the publisher's website here.