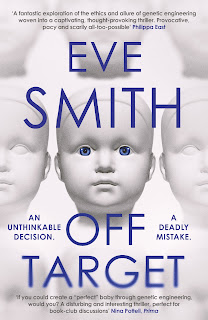 I'm grateful to Karen at Orenda Books for an advance copy of Off Target (handed over, as all the best intel is, at a party in a foreign Embassy...) and to Anne for inviting make to take part in the blogtour.

Off Target is a meticulous dissection of a relationship - in fact, of two relationships, that between teacher Susan and her husband Steve, and between Susan and her daughter, Zurel. Opening in heartbreaking chapters about Susan's difficulties conceiving, and the impossible choices those difficulties dictate, it then switches focus to a second part that looks at Zurel, now approaching her teens, at what she wants and fears. Both parts are set against the backdrop of runaway genetic experimentation and augmentation. In the climax of the book, the two themes entwine, bringing Susan to unwanted public attention and placing Zurel in danger.

I love books with big themes, and they don't come bigger than this - the conception and development of a child, an impossible child in fact (you'll have to read the book to learn why I use that word). The future of humanity as genetic possibilities outstrip ethics, regulation and restraint. Anguished personal dilemmas constrained by money, societal attitudes and relationships.

In presenting Susan's desperate desire to be a mother, Eve Smith really brings home her distress and desperation; at the same time, she's both desperate to succeed, and weary of the trying. Her most intimate moments are regimented and driven by apps and tests, her life taken over by online support groups and marketing, by a combination of cutting edge science and old wives' tales. And overlaying everything, guilt. All that's the background to a reckless course of action which Susan justifies to herself, though the reader, however sympathetic, will see catastrophe coming.

The story is punctuated by a series of articles from near-future media, showcasing a genetics industry offering unimagined bounty (or is it?) - fertility, ability, the easy cleansing away of illness and disability all articulated in the bright upspeak of marketing at its most glossy. Creating a darker seeming future even than the typical grim dystopia, these snippets also chart the coming of an anti-technology subculture, driven by rumour and fake news, which will also play its part in the story.

What really broke my heart, though, was the second part of Off Target. There, Smith gives us the 11 year old Zurel, a very with-it young woman who's become non-verbal following some unspecified event. Zurel just wants to be normal. Actually, she's perfect: thoughtful, kind, intelligent and perfectly able to communicate but of course against a background of gene therapies suspected of going wrong, Susan's wracked with guilt that her daughter's silence was caused by her own actions of eleven years ago. But Zurel's about more than her genes, and the truly wrenching aspect of this story is Smith's calm depiction of Zurel trying to understand herself, her origin and the increasingly scary events around her.

We also get to see quite another take on Susan who was so sympathetic a character earlier. Zurel's point of view is rather different. What's so brilliant about Off Target though is that neither is actually wrong. Susan is a complex persona in - as becomes clear - a complex relationship. The critique of Susan we see  here is all the more telling for that sympathy, which the reader still retains.

That's totally fitting for a subject which is both morally extremely complex and close to all our hearts. As in The Waiting Rooms,  Smith shows a real knack for making the complex understandable; sketching an eerily plausible near future; and creating characters who are just, well, real. Every bit as good as its predecessor, this book is what you need to be reading to understand what's coming next.

For more information about Off Target, see the other stops on the blog tour - they're listed on the poster below. And don't forget the Orenda Books website here.

You can buy Off Target from your local bookshop, or online from Bookshop UK, Hive Books, Blackwell's, Foyles, WH Smith, Waterstones or Amazon. 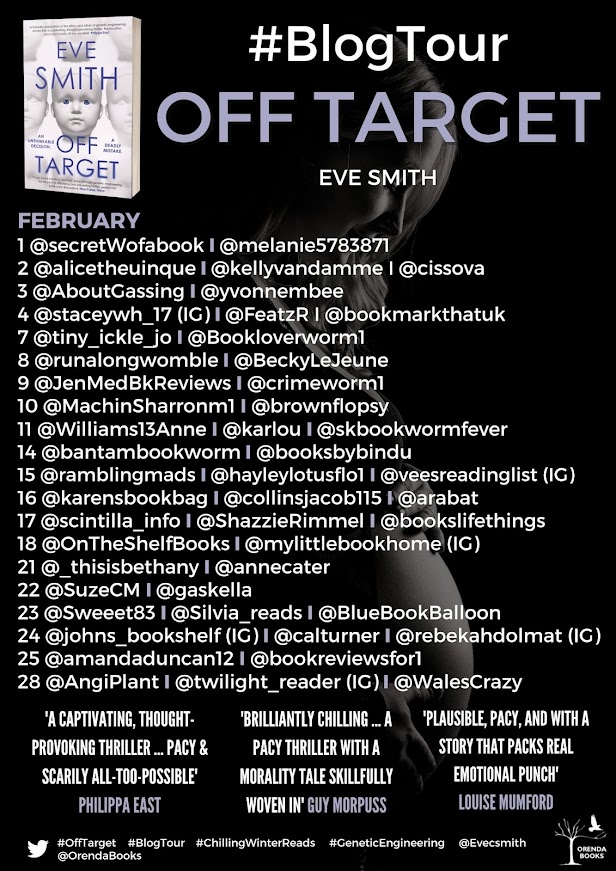