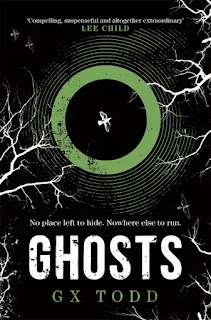 I'm grateful to the publisher for an advance e-copy of Ghosts via Netgalley.

Ghosts is the fourth and final part of GX Todd's The Voices sequence, bringing the story so far to a satisfying yet at times desperately sad conclusion.

I recently stumbled across an online discussion of the "cosy catastrophe"subgenre, post-apocalyptic literature in which, despite an apparently ruinous collapse of society, our heroes actually do rather well. They don't have to perform grinding work for somebody they don't like, they have the pick of abundant food and supplies helpfully left behind, the benefit of all human knowledge codified somewhere or other and above all, no longer have to suffer all those other irritating people.

Well, if had to choose one word to describe what The Voices ISN'T, it would be "cosy".

Spanning a period of seven years or so from the time "it" happened to the present, and ranging back and forth within that, these books describe a collapse that occurred when people began hearing "voices" in their heads, voices that drove them to do terrible things, torturing and murdering others and killing themselves. The series therefore deals with themes of extreme violence and suicide: approach with that in mind. While these destructive urges moderated in time, for those living in a ruined world with no order or safety, the few survivors focused to begin with on trying to identify and, yes, destroy anybody who still had a "voice" and could therefore be considered a threat.

By the time of Ghosts, things have rather turned round and now we see instead those with voices combining to track down and kill the voiceless in revenge or self-defence. Daily life remains a desperate struggle to secure and protect basic necessities, with survival dependent on quick wits, strength, weapons and a healthy mistrust of others. Things can go wrong in an instant due to deliberate action (the Voices can hear and speak to one another, sometimes capriciously betraying their owners) or misunderstanding and over-quick trigger fingers. We see both in Ghosts.

Amongst all this, small groups still try to survive and find some hope. Messianic cults flourish, particularly that of the 'Flitting Man', gangs spring up to control different areas of cities and provide a simulacrum of order and a few people who still have apparently benign "voices" seek each other out and rescue what they can from the rubble.

The previous books have followed a number of such groups, seeing them form and scatter again, with some members killed, disappeared or departed on various quests and, in a landscape of jumbled chaos and betrayal, even the sequence of this can be hard to recover. Across the books we are shown the same incidents from different perspectives, or told how the consequences fall out for different characters. Sometimes effect is portrayed ahead of cause and the full story kept back until later. None of the groups we witness has anything like the full picture - I had thought at the start that one or other of the Voices we hear might have some wider insight which Todd would use to explain what is really happening, but she avoids allowing that to happen - so reading these books is, until the very end, like viewing the world through a mirror with many cracks. It might be frustrating if you like your apocalypses cut-and-dried, but as a way of modelling the dislocation and loss one might suffer when the world slides into chaos, it's simply brilliant, leaving the reader with a growing sense of dis-ease and looming disaster. As I said, there is nothing cosy here.

In keeping with that, while Ghosts does provide some closure, it's far from complete, for several reasons. First, if the physical setting is harsh, the moral landscape is even bleaker and dislocated. The "war of all against all" has its impacts. It's hard to point to anyone who doesn't have blood on their hands and even the groups we've been following who we might like to think as the "good" struggling against the "bad" do some terrible things, deliberately or not. Secondly, the motives, origins and nature of the "voices" are hinted at but never explained. We seem to be watching a struggle between certain of them - Piligrim's original "Voice" and its later offshoot, that of the Flitting Man, a few others - suggesting that the death and suffering visited on humanity is essentially in service of warring powers but I'm not 100% certain of that and if that is what was going on, it's far from clear whether it was actually resolved for not. Finally, however you try to fit the pieces together, the different perspectives and timelines mean that certain incidents just bear multiple interpretations, raising questions about whether this is really one story or several and about who is telling the truth and who may not be.

Throughout the sequence, there has been a current of - I'm not sure what to call it. Prophecy? Desire to find a cause, something to believe in? Whatever, it hasn't always had healthy outcomes for the protagonists, often sending them running into danger or aligning with the "wrong" faction. Rather they've tended to do better when guided by simple, human goals: searching for and protecting a friend, a sister. Saving others. Sharing. That's been the basis of many of the temporary groups trekking across the wasteland that was once America, but it has been hard, and gets much harder here, to ignore the bigger things going on and the push of events as the various currents come together.

In Ghosts, the two themes finally become completely entwined, leading to a violent and seemingly hopeless confrontation which nicely joins the need to save and protect other loved ones and to somehow - some way - confront the darkness that slips through the wastelands, creating chaos and conflict. Everything, and everyone, is in the balance and while we've seen heartbreaking loss already, it seems as though it will get worse and worse now.

This sequence was like nothing else I've read, a truly heartrending story of love, loss, endurance and commitment in the face of chaos and wickedness. I'd strongly recommend it, but if you have managed to miss out on the previous books you really do need to go back and begin with Defender.

For more information about Ghosts, see the publisher's webpage here.