#Review - Eye of the Sh*t Storm by Jackson Ford 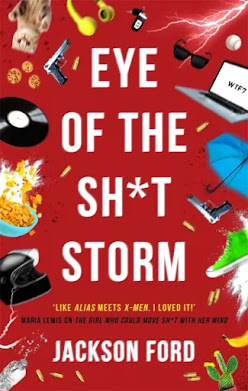 Jackson Ford
Orbit, 29 April 2021
Available as: PB, 496pp, e, audio
Source: Advance e-copy provided by the publisher
ISBN(PB): 9780356514666
I'm grateful to Orbit for an advance e-copy of Eye of the Sh*t Storm.
'So it turns out, you can totally fall asleep while escaping from a gunfight on the back of a really loud motorcycle.'
I was watching the Oscars last night, broadcast from Union Station, Los Angeles. But I didn't see the glitz and glamour, oh no. I saw an exhausted Teagan Frost and her gang breaking into the empty station at night to escape from an increasingly dystopian, post The Big One, LA.
That scene really is in the book, so if you want to orient yourself, go and look at the coverage.
You'll have to imagine, though, that things are somewhat more desperate that you can see on TV...
In this one, Teagan is definitely running on empty. A few months after the events of Random Sh*t Flying Through the Air, China Shop, the removal firm that's really a secret agency, is falling apart after the loss of a key member of the team. Teagan, whose psychokinetic ability is at the centre of the operation (she really is The Girl Who Could Move Sh*t With Her Mind, appears on the brink of losing her other, found family (her birth family, who made her what she is, having died years before). Teagan's alienated her boyfriend, colleague Annie hates her and she's STILL no closer to doing that chef's course (in fact, further off, since most of LA's kitchens no longer exist).
It is, I'd say, a doomier book than the previous parts of The Frost Files. LA was devastated in the earthquake that China Shop couldn't prevent (although they stopped it being much, much worse). What's left is a ruined landscape full of shuttered businesses, unsafe buildings and homeless people trying to keep their lives together. The team seek refuge in Union Station because it's shut and they need somewhere to go. Transport across the city is difficult with bridges down and roads blocked, and many of Teagan's favourite restaurants are no more. As the gang, splitting into different factions, set out on a nightmarish journey to reunite a young boy with his father, there's a real feeling of things falling apart.
It's not only exhaustion, hunger and hostile forces that bring the darkness. The events of the first two books have left scars, and Teagan - who is, remember, very young - is clearly struggling. With guilt, afraid that she - or what she is - caused much of the harm, and that she may do more. With relationships, having drifted away from her boyfriend Nic (though he pops up again here to give her an excoriating lecture on racial assumptions and privilege - Teagan's put her foot in it again: "I still tried to tell a black American about how the law wouldn't protect me.") And with the dark legacy of how her powers arose, and who else may share them.
The book is, basically, a single desperate chase, running from one danger into another with very little time to consider the bigger picture or work out what may be happening. There's a little reflection on that from Reggie, Teagan's quadriplegic handler (and we learn more about Reggie's past too) and also from Moira Tanner, their distant and scary boss in Washington DC, but these don't interrupt the flow much, it's action, action, action for Teagan and the stakes are scarily high.
If you have read either of the previous books in this series you'll know more or less what to expect, but there is a sense here that Ford has now got into top gear, and the pages of this book simply fly by. I really, really can't imagine what's going to happen in Book 4 - because, no, The Frost Files isn't a trilogy and with Teagan getting in touch with her roots (as well as picking up a couple of new and lamentable habits along the way) there is a strong sense by the end of this book that ANYTHING could happen next.
A firm recommendation from me for this one, and if you haven't caught up with the series yet, DO IT NOW.
For more information about Eye of the Sh*t Storm, see the publisher's website here.