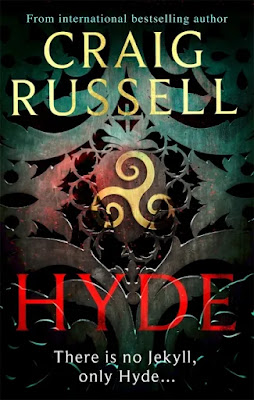 Hyde
Craig Russell
Constable, 29 April 2021
Available as: HB, 400pp, e, audio
Source: Advance e-ccopy
ISBN: 9781472128393
I am grateful to the publisher for an advance e-copy of this book via NetGalley.
In Victorian Edinburgh, Detective Superintendant Edward Hyde is uneasy. In one case of frightful murder, leading to a hanging, he worries that the police have got the wrong man. In another, he finds himself conveniently close to the victim, but can't remember how he came to be there. And there are nagging requests from Special Branch in London to investigate a rising nationalist politician.
And Hyde's sessions with Dr Porteous, who he relies on to cure the memory loss and associated troubling dreams, are not helping at all...
Russell's speculative detective novel, loosely framed around Robert Louis Stevenson's novel Doctor Jekyll and Mr Hyde (there is a prologue in which Hyde tells Stevenson his story as inspiration to the latter) is a heady blend of many elements.
There is the brooding, unrestful Hyde, half convinced that he is a monster - people tend to draw away from him, as though sensing something troubling about him. Hyde is I think suffering (alongside the epilepsy that Porteous diagnoses) from PTSD, after serving in the army in the East. Russell makes a point not only of the awful things that Hyde has witnessed and indeed taken part in, but also of the taint, the fundamental badness, of the campaign that Hyde took part in, devoted to theft and looting ('cruelties performed under a sun-blazed sky in the name of Empire'). Fragemented personalities recur ('he had been a different man, back then).
This links in turn to political turmoil, as Scots radicals seek to free themselves from what they see as English domination and from being associated with that same infection of Empire. This is an interesting connection to make, the focus on colonialism and its relation to English and Scottish history and society being a truly hot topic in today's politics and one capable of provoking strong emotions (see the UK Government's defensiveness over challenges to the interpretation of colonial-era figures and artifacts).
Underlying this is a third layer - a preoccupation both with the Celtic supernatural, as both occultists and mountebanks move in various secret circles overlapping both with nationalist politics and with the apparently staid Establishment. That preoccupation bleeds into national myth-making about the origins of the Scots and their real destiny. And alongside all this, Russell also reflects the place of gay men in society, and the constraints under which women exist. We meet Elspeth Lockwood, heiress to one of Edinburgh's great department stores, a woman who very much wants to go her own way, and I really liked Dr Cally Burr, who performs many of the autopsies for Hyde; as a female doctor, she's treated with a great deal of suspicion and is short of work (we see her being helped out by the famous Dr Joseph Bell, mentor to Arthur Conan-Doyle who is mentioned but does not appear in the story). Burr is smart and resourceful, practical where Hyde seems likely to wilt under the various stresses that he suffers, and certainly the kind of person you want beside you in a creepy Gothic house at night.
Because this book is Gothic, whatever else it may be. There is an isolated mansion of bad reputation, whispers of supernatural beasts, devils and ancient gods and of secret sects and guilds behind the bland face of respectable Edinburgh ('fine Presbyterians of good birth and standing leading double lives') as well as secret tunnels beneath it, at least some of which are certainly real. There's a danger, I thinks in overdoing the Gothic, but for my money, Russell gets it just about right: enough, combined with the theme of madness and loss of identity and control, to darken the atmosphere (alongside the various horrific murders) but not enough that solid, systematic police work becomes self-evidently pointless. Truly, Edward Hyde lives in more than one world at one, but he is sufficiently rooted in the "real" one, enough of a respected, credible figure that he makes progress, gets things done (aided by Burr's shrewd insights).
The book is also grounded in the medical science of the time (even if it looks primitive to us) and it is convincingly, pleasingly Victorian without were seeming a pastiche. Russell has fun with erudite bits of language and Hyde will certainly broaden your vocabulary, adding words such as muliebrity, supervenient, brumous and peccancy. I did see a couple of the plot twists coming (such as the identity of the Hanged Man) but there were also some jaw-dropping surprises and, above all, Hyde is a book that hooks the reader and builds to a tremendous climax.
An interesting counterpoint to Russell's The Devil Aspect which also dwelt on issues of good and evil, divided personality and the relation between individual responsibility and political crime.
Definitely recommended.
For more information about Hyde, see the publisher's website here.
Email ThisBlogThis!Share to TwitterShare to FacebookShare to Pinterest
Labels: 2021, crime, Edinburgh, gothic, Neo Celticism, Scotland, Victorian