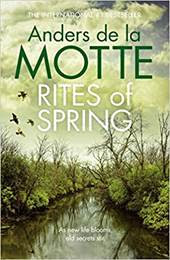 Rites of Spring (Seasons Quartet, 4)
Anders de la Motte (Translated by Marlaine Delargy)
Zaffre, 1 April 2021
Available as: PB, 400pp, e, audio
Source: Advance e-copy
ISBN: 9781785769481
I'm grateful to the publisher for an advance e-copy of Rites of Spring to consider for review, and to Tracy for inviting me to take part in the blogtour for this book.
Firmly in the category of folk horror, but cutting over into crime, Rites of Spring works hard to distance itself from the idea of a clean, bracing Arctic Scandinavia, all icy mountains and pine forests, presenting instead a damp landscape where abandoned dwellings moulder, where children reenact ancient rituals in mossy, overgrown stone circles and where every community has outsiders who are shunned as feckless beggars.
One such family is at the centre of Rites of Spring. In 1986, sixteen year old Elita Svart, daughter of local ne'er-do-well Lasse Svart, is found murdered on Walpurgis Night, 30 April, the night when witches ride, when the Green Man is burned in effigy - and when he mounts his horse and roams the forest.
Moreover, Elita's found lying on a sacrificial slab in a stone circle, her face covered with a cloth and in her best dress. Subsequently, a letter comes to light suggesting she intended her death, and her stepbrother is accused of the crime - after lengthy and intensive police questioning.
Jump forward to 2019, and Elita's been airbrushed out of Tornaby's history, guilt assigned, the rest of the family nowhere to be seen. The four young kids who were with Elita that night have gone on to make their own lives, with different degrees of success. One of them, David, is a chef who's opening a prestigious new restaurant nearby. He has returned to Tornaby with his new wife, Thea Lind, who's taking up a post as the local GP.
Thea is the heart and soul of this book, herself a mystery that is almost more interesting than the distant crime with which she becomes fascinated. Why does Thea hide her identity? Why is she so threatened when David's nerves means she has to step forward and take a TV interview for him? Who is the "Margaux" for whom Elita provides a commentary on what is happening?
The first third or so of Rites of Spring moves slowly and carefully while it establishes its setting, characters and atmosphere. We hear from Elita in her own voice (in 1986), from Thea addressing Margaux (in 2019) and there is also a third person narration from 1886 following a couple of characters who we'll meet head on later. This means that the story - in the sense of who is who and why they matter - is elusive to begin with. Some readers may prefer a more direct approach, but I found that this way of doing things was almost eerily effective in establishing the basic weirdness of the situation, before Thea really got to work shaking the tree, as it were.
And it is weird. The village itself is an inward- looking and suspicious place. It's a long way from anywhere, and change isn't welcome (the presence of mineral prospectors is especially resented). Within the community, there is a respectable core - the teacher, the bank manager, the doctor, the Count, whose father used to own most of the land around - surrounded by their retainers - such as the estate workers - and a resented underclass, whom the Svarts were part of: their kids jeered at at school, their activities tolerated just as long as they're useful (such as brewing moonshine), their tenancy of a ramshackle farmhouse dubious.
To Thea, who's travelled the world, working for Medicines San Frontiers, who's seen horrific injuries, been bombed in Syria and lost friends, it seems terribly narrow and secretive. She feels that her husband ha suffered because of it, and wants to get to the truth for his sake.
Or does she?
Thea herself, we will discover, has secrets to keep - secrets that will make her vulnerable when she becomes focussed on digging up the truth about Elita, a truth that someone clearly wants to keep hidden. But secrets that also make her sympathetic to the girl who became the "Spring sacrifice" - perhaps explaining her reckless commitment to explaining what really happened in 1986. Several times in this book, Thea did something, or pressed on when warned to stop, in ways that had all kinds of red lights flashing for me. There's a certain point past which everything seems bound to end badly, with loss and grief for everyone, and when Thea's quest takes her past that point you begin to feel as though she almost welcomes that, as though she's been heading for self-destruction right from the start.
Like Elina, perhaps...
Altogether, a nailbiting and absorbing book, one that I had to pause several times, simply to let the tension go, but which in the end I just had to finish at a gallop, reading the final third more or less in one sitting.
You can find out more about Rites of Spring from the tour entries listed on the poster below. You can buy the book from your high street shop, if they're doing click and collect, or online from Bookshop dot org, from Hive Books, Blackwell's, Foyles, WH Smith, Waterstones or Amazon. 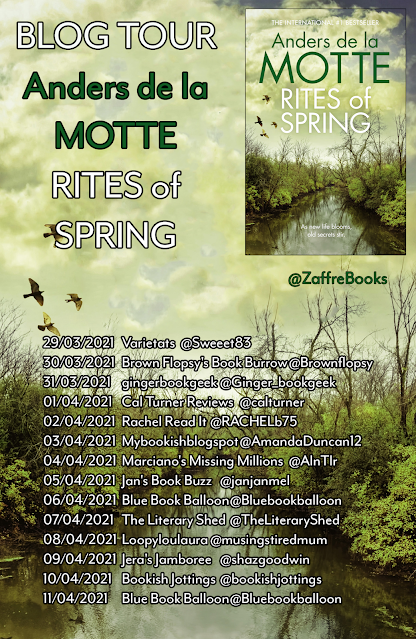