#Review - The Beautiful Ones by Silvia Moreno-Garcia 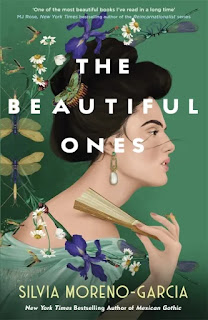 I'm grateful to the publisher for an advance e-copy of The Beautiful Ones via NetGalley and for inviting be to be part of the Social Media Blast.

The Beautiful Ones is an engaging fantasy-romance with a hint of magic. Originally published a couple of years ago as an e-book only, it's now getting a deserved wider release from Jo Fletcher Books.

The book is set in Levrene, a country like... well, perhaps a bit like somewhere in central Europe, on a planet a bit like Earth, around the turn of the 20th century. While clearly an imaginary world, many of the place names, both local (Loisail, Montipouret, Luquennay) and remote (Port Anselm, Yehenn, Carivatoo), evoke that, as does the atmosphere of carriages, telegraphs and newly built railways.

Despite these stirrings of modernity it is still a ferociously traditional society, not to say patriarchal, with women's roles in particular narrowly constrained by the rules of etiquette and the fear of what Society will make of any scandal. A woman's only asset is, it seems, her reputation.

Against this background we follow the lives of Antonina (Nina) Beaulieu, a young woman from the country in the capital for her first Grand Season and Hector Auvray, 'a castaway who had washed up on a room of velvet curtains and marble floors'.

Nina would rather be at home collecting beetles and exploring the woods. She'd certainly prefer not to be under the dominion of her martinet Aunt Valérie. Valérie despises Nina and takes delight in being cruel to her. Nina, young and inexperienced, chaffes at the restrictions imposed on her and unknowingly torments Valérie with visions of what she has lost.

Hector is a performing magician - and here we meet the first feature that makes this book a little different. Hector is not just a conjuror, but can, in reality, perform magic. He can move objects by thought alone and has made a spectacular career of this. The place of magic in this book is well thought out - it's not high fantasy, we have no duelling mages here, and on the whole, 'Talents' as they're called are accepted, if treated with a bit of suspicion. But there's no doubt Hector is an outsider to the carefully modulated social set who call themselves The Beautiful Ones.

This isn't only because of his abilities. Hector is of humble birth and that isn't forgotten, but he has amassed a fortune, and The Beautiful Ones do crave money for the upkeep of their ragged castles and their lavish lifestyles. ('Nothing matters more than money to us, the proper people who walk down these city streets in pristine gloves and silk-lined garments').

In fact, the quest for money via an advantageous marriage is ever present in this book, giving distinct echoes of Austen: Aunt Valérie in particular wouldn't be out of place in a drawing room weighing up newly arrived officers and considering which daughter should pair off with who. But there's more to Valérie than that - a tragically romantic past that has marked her life and drives her still. It wouldn't be too much to say she's the presiding spirit of this book, setting much of the plot in motion and pulling strings behind the scenes to get what she wants. It's a chilling, at times frightening role that makes one both hate and pity her. Warped by having had to conform herself and enter a loveless, childless marriage, she's something of a cross between Lady MacBeth and Anna Karenina, now determined to inflict the same on others, her own hatred a measure of the love she believes she could have had.

I enjoyed the way Moreno-Garcia makes Valérie both the voice, and the victim, of the stuffily rigid society. This is a very character-driven, people-focussed story - beyond names and cultural trappings we don't learn a great deal about wider society, we don't see ordinary people at work or anything of the politics (apart from learning, in a couple of throwaway lines, that there is a King). Yet by skewering that one aspect - the position of women in the more privileged layer - we can I think infer the rest.

A very enjoyable read, with characters who felt real to me and about whom I found myself caring a great deal, and gripping to the very end.

For more information about The Beautiful Ones see the publisher's website here - or any of the other sites taking part in the Blast - see the poster below!

And you can BUY the book from your local bookshop, from UK Bookshop dot org, from Hive Books, Blackwell's, Foyles, WH Smith, Waterstones or Amazon.